Shopping and the Single Male: A Modern Day Scarytale

I bumped into a gay business associate recently, and it was a quite a wake-up call. Instead of saying, “Hello,” he literally stared me down from head to toe and, in front of a crowd, blurted, “Honey, you need a Queer Eye intervention of the greatest kind! What’s with the pleats?”

Glenn had his sidekick with him. Impeccably dressed in an expensive designer suit, his cohort had his arms crossed and a scowl on his face, silently conveying anger and disgust that I had violated every rule of fashion. I panicked, fearful that I was about to be ostracized, maybe even permanently banished by the metro chic mafia. 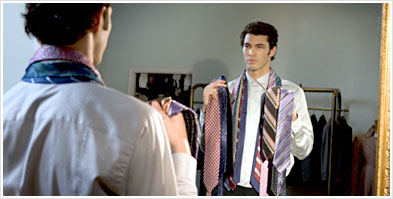 I had to come clean. So I admitted that I hadn’t gone shopping for clothes since I was married, almost nine years ago, and that I didn’t trust myself to shop alone. I apologized for offending Glenn, his friend and men everywhere, which eventually got me some sympathy and a directive to run as fast as I could to the nearest newsstand to “pick up a copy of GQ and Men’s Health without passing GO.”

I thought a lot about what Glenn said. I’ve been in denial about my wardrobe for years, and this incident shined a glaring spotlight right on it.

But while marriage wasn’t for me, I realize that primary benefit to our short-lived union were sound fashion advice. In my 41 years of life, it was only during those three years of marriage that I actually dressed decently. I didn’t have a ton of clothes, but I had some solid pieces. I was generally well put-together in my Armani turtlenecks, tailored khakis and brown leather, like a Ken doll, without the hair plugs.

The irony behind the fact that I can’t shop for myself is by no means lost on me. I’m a man with a cutting edge design sense who has built a career as a trend marketing guru. I actually orchestrated the stud and rhinestone craze in 2000 that set the entire fashion world on fire, by re-launching the iconic seventies pop culture gadget, The Bedazzler. I know what looks good – on other people. But when I get into a store to shop for myself, I panic and head back towards the door. I’m that guy from a bad sitcom – the one who is getting dressed for a wedding and knocks on more than 20 doors in my building, until I can find someone to help me tie my bow tie. How lame is that?

Since bumping into Glenn, I have been thumbing through magazines, and have actually invested in a few classic pieces. As humiliating as this wake up call has been, I have found some comfort in the knowledge that I’m not alone. The more I look around me, the easier it becomes to identify those guys who are single and those who are in relationships, simply by looking at how stylishly or hideously they dress. I really believe you can tell when someone is put together with that “woman’s touch.” But with a little effort, a single man can cultivate this gift on his own.

While I continue to think of myself as a work in progress, I would like to leave you with 10 important forward fashion tips I’ve learned along the way:

1. Define your style. Don’t let others do it for you. Buy a few men’s magazines for some clues as to how the rest of the male population is actually dressing. If you’re too cheap to buy magazines, go stand in the middle of Times Square and stare at the billboards. Better yet, observe other men on the street, at work, in Starbucks, at restaurants … It will take a few months of reading and observation, but eventually you will gain some insight into the do’s and don’ts of dressing and discover a look that suits you.

2. Go to stores where fashionable salespeople can offer some guidance. Identify the salesperson wearing clothing that come the closest to your sense of style. Try to shop at places where salespeople don’t work on commission, so you’ll get an honest opinion. In order to test their honesty, try on something overtly hideous and say “I love this, what do you think?”

3. Don’t stray too far from your comfort zone, if you can’t pull it off. If you’re wearing something that makes you feel like an idiot, it’s not for you. Think Donald Trump in Old Navy. It’s just doesn’t work.

4. When it comes to buying clothes, if you think it’s hideous, it probably is. Before you leave the store with a sweater that looks like Bill Cosby wore it in an eighties Jell-O commercial, ask yourself at least five times whether what you’re about to buy will ever actually be worn.

5. Don’t buy anything flashy or memorable that will be noticed if you wear it more than once. If it’s too memorable, like one of those ridiculously expensive Versace shirts, you could go years between wearing it, but everyone will still wonder, “Didn’t he just wear that?”

7. If you think a stylish wardrobe alone will help you score with the ladies, it won’t. You’ll need a Black Card or personality to go with it. If you lack either of those, you better look like Brad Pitt.

8. How you style your hair is as important as your outfit, so if you are rockin’ an old school doo, it’s not going to work with your new look. If you have short hair, you can get away with Supercuts. If you have long hair, don’t be cheap. The last thing you need is for people to think you got your hair cut at the school for the blind.

9. Take stock of your cologne. A fashion expert recently told me you can actually smell out of style. Who knew? When I challenged him, he illustrated his point with Old Spice and English Leather, vintage scents guaranteed to make the modern woman gag. I ran home and quickly poured over the colognes in my medicine cabinet, only to discover Drakkar Noir, Joop, Aramus, Polo and Quorum (I swear I haven’t worn any of them since I was 25; I just couldn’t bear to throw them out!). A tiny piece of advice: if you used words like “boogie” the first time you wore your favorite scent – if it’s been around since Frankie said “Relax” or “We are the World” was on the radio, it’s probably time for an overhaul. Or you can always play it safe and not wear any at all.

10. Find a stylish female friend who likes you enough to go shopping with you, or take advantage of any opportunity to take along a woman you are dating, to help.

Good luck to you gentleman. And remember to pay it forward, for the sake of the brotherhood. If you have a friend or loved one who’s also clueless about shopping alone and has absolutely no sense of style, it’s your duty to get his family and friends together and facilitate a fashion intervention. Real men do cry and eat quiche, but they should never let their brethren hit the streets in clothes purchased from stores ending in “mart.”

Shopping the Blues away

Shopping the Blues away