Blood Specimens the Differences between Serum and Plasma

There are three types of blood specimens commonly used in the clinical chemistry laboratory. These are whole blood, serum and plasma. The type of the test determines which specimen should be used.

Whole blood includes both the cellular elements and the plasma, so in vitro; it contains an anticoagulant; while plasma is the supernatant fluid when whole blood is centrifuged.

These are the differences of serum and plasma: 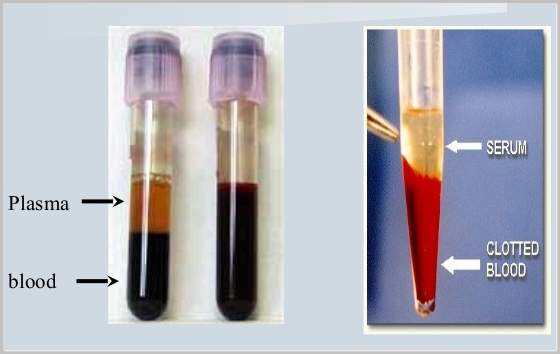 1. Serum is the supernatant fluid when coagulated blood has been centrifuged. The blood is allowed to clot at room temperature for 15 to 30 minutes. When the blood has clotted completely, it is rimmed or ringed with an applicator stick, and then centrifuged for 5-10 minutes at 2,500 revolutions per minute (rpm). The supernatant fluid is then separated making use of a Pasteur pipette, and labeled accordingly.

Plasma, on the other hand, is the supernatant fluid obtained when anti-coagulated blood has been centrifuged. The blood is mixed with an appropriate amount of anticoagulant like heparin, oxalate or ethylenediaminetetraacetic acid (EDTA). This preparation should be mixed immediately and thoroughly to avoid clotting. The solution is then centrifuged for 5-10 minutes at 2,000 -2500 rpm. The supernatant fluid is then separated just like serum and then labeled properly.

2. Serum is clearer than plasma because of fewer proteins. Fibrinogen- a protein- is present in plasma and not found in serum. Proteins are sometimes considered as interfering substances in some tests as they react with the reagent and thereby yield inaccurate results. The presence of more protein components would render the supernatant fluid more turbid.

4. Plasma does not need “standing”; it could be centrifuged as soon as it has been mixed thoroughly.

6. Serum is still the most preferred specimen in Clinical Chemistry as the interferences that maybe caused by a plasma specimen because of the presence of an anticoagulant, is eliminated.

7. Serum takes a longer time to prepare than plasma, because you have to allow the blood to clot for serum preparations. Plasma could be centrifuged immediately after mixing thoroughly.

You should be aware of the type of test to be performed so that you are able to choose the correct blood specimen. Being knowledgeable about the differences of serum and plasma would assist you in deciding between the two which would be the ideal specimen for a particular test.

How to Manually Prepare a Protein Free Filtrate