Stages of Meiosis 1 and 2 (With Pictures)

Meiosis is the type of cell division that is seen during the formation of gametes (sex cells). It consists of two successive divisions which are meiosis 1 and meiosis 2. In meiosis 1, the number of chromosomes is reduced by one-half and for this reason, it is called reduction division. Meiosis 2 results in separation the sister chromatids and for this reason, it is known as equatorial division. Each of the two meiotic divisions is divided into interphase, prophase, metaphase, anaphase and telophase. Each stage is followed by 1 or 2 indicating whether it belongs to meiosis 1 or 2. Here are list of stages of meiosis 1 and meiosis 2 as below:

Discover What Occurs During the Meiosis Stages

One of the most important processes in this stage is chromosomal replication in which each chromosome produces an exact copy or replica of itself. The chromosomes are not visible as discrete structures but instead, they appear as a diffuse tangle of threads called chromatin. Another important process that takes place is the formation of new cellular organelles. There is also a build up of energy to be used up in the meiotic process. 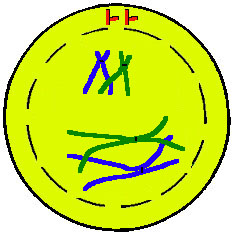 This stage is manifested by the chromosomes becoming visible as distinct bodies as they get shorter and thicker and centrioles become arranged at opposite sides of the nucleus. As prophase progresses, homologous chromosomes lie side by side and become intertwined rather like a zipper forming pairs called bivalents in a process called synapsis. Chromosomes may become coiled around each other and their chromatids may remain in contact at points called chiasmata. During synapsis, homologous chromosomes exchange genetic material between one another. This exchange is called crossing over. 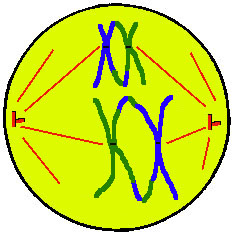 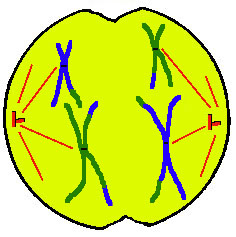 Homologous chromosomes separate and migrate to the opposite poles with their centromeres leading. This is because the spindle fibres shorten and thus the chromosomes are pulled. It is important to note that sister chromatids do not separate at this stage. 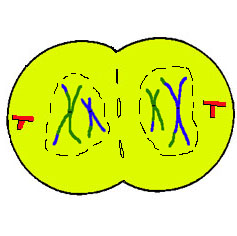 Once the first meiosis is complete, the daughter cells usually go into a short resting stage which is the interphase 2.

Chromosomes migrate to the equator of the cell and attach to the spindle fibres at their centromeres. They then orient themselves towards the opposite poles.

The sister chromatids separate and migrate to the opposite poles. 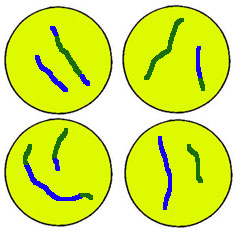 The spindle apparatus disappears. The nucleolus reappears and a nuclear membrane is formed around each set of chromatids. The chromatids become the chromosomes of the daughter cells; they uncoil and regain their thread-like form. The cytoplasm divides across the middle.

Thus meiosis results into four daughter cells each having a haploid number of chromosomes.

a) Helps to restore a constant diploid chromosomal constitution in a species at fertilization.

b) Provides opportunities for new combinations of genes to occur in the gamete cells leading to genetic variation in the offspring produced by the fusion of gametes.

How does an Organism with Diploid Body Cells Produce Haploid Gametes