How do Animal Species Survive in Brackish Water 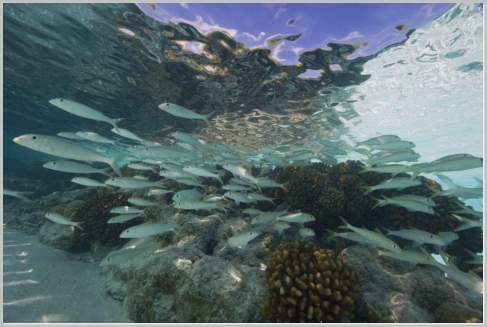 Animals and other species manage to thrive well in brackish water by adapting to the factors that differ between fresh and saline water. There are also physical forces, such the force of water that concentrates and becomes more powerful in channels and estuaries, and there may be temperature issues. Brackish water ranges from .5 to 30 parts per thousand of salt.

Brackish waters can also be quite variable as marine (from 30-50 parts per thousand of salt), tides go in and out, increasing or decreasing the salinity of the water. Lifeforms that live in and use the water must also adapt to rapid and even wide changes in salinity and in the physical aspects of the water, including temperature, water density, ph balances, buoyancy, wave action and changes in nutrients.

There are changes in evaporation rates and in the interaction with water and atmosphere, as the water can carry salts and molecules of varying chemicals.

From the freshwater side (less than 5 parts per thousand of salt), there is the introduction of water runoff, silt and pollution from human and animal waste, fertilizers and industrial outflow that might affect temperature.

Estuaries are the most common brackish areas. They can be broad, slow moving areas of waters where rivers meet the ocean. They may include narrow channels, but mostly involve water that looks awful, but is full of life and activity. There is high productivity of nutrients and metabolic functions but, oddly there is less diversity of life than in freshwater or open ocean biomes. Vertebrates and fishes are less inclined to tolerate the mixed, higher or lower levels of salinity of the estuary than freshwater or marine counterparts. There are fishes that interact with either end (more saline or less saline), but there are pure brackish species of fish and invertebrates.

The mangrove swamps are dependent upon a particular, tropical mangrove tree, which provides a unique habitat in brackish environments and which support enormous diversity and quantity of life on the water, in the riparian land zone and in the canopy of the mangroves.

In shallow brackish zones, there may be sea grass meadows which may form in the shallower brackish waters and provide habitat, for seahorses along with a wide variety of fish and invertebrates.

Salmon are a species of fish that is “andromous” or able to adapt from freshwater to saline environments, as they migrate from the sea to the rivers in order to spawn. Eels are catadromous as they migrate from the rivers to the sea in order to breed. Herring are a species of fish that uses estuaries or brackish zones as “nurseries” either for spawning or to raise young until they can fend for themselves.

Brackish seas, such as the Baltic Sea can have stratified fresh and saline water, where some fishes live in the freshwater layer and others live in the salt layer.

The Caspian sea is home to a very special caviar producing species of sturgeon and to the only well known non marine (salt water) seal. The Caspian sea is officially a lake, but has salinity at about 1/3 that of the ocean.

In summary, there is a huge array of brackish water areas in the world, from some of the Scottish lochs to the inland seas to the mangrove swamps of Florida, to the Thames river estuary in England. There is far too much diversity of life that either lives in the riparian zone of brackish water lands, on the water, or in the water. And some species of fish migrate between fresh and saline zones through the brackish zones. Wikipedia has a very good list and set of links to descriptions of the most well known brackish zones of the world.

What is Brackish Water