The Differences between Mitosis and Meiosis

The cell is the basic unit of all life. For an organism to grow and reproduce, new cells must come into being. This happens through a process called cell division, wherein one cell becomes two or more cells.

In prokaryotes, or simple organisms such as bacteria, cells divide using a process known as binary fission. In eukaryotes, or more advanced, multi-celled organisms such as plants and animals, the cell division process is more complex. Eukaryotes contain two types of cell, somatic cells and gametes.

Somatic cells make up the body of an organism. Internal organs, skin, connective tissue, blood and bones are all made up of somatic cells. Gametes are reproductive cells, such as human sperm cells and eggs. Somatic cells and gametes each use a different method of cell division.

Mitosis is the process by which somatic cells divide. As an organism grows to maturity, and as it repairs wounds and other damage, it does so using somatic cells. It is beyond the scope of this article to describe mitosis in detail, but here is a brief overview.

Following interphase, the process of mitosis begins. The membrane of the nucleus dissolves and the chromosomes are separated, creating two identical sets of genetic material. A new nucleus then forms around each set of chromosomes, completing mitosis.

Following mitosis, a separate process called cytokinesis physically divides the cell into two separate cells. All somatic cells contain the complete genetic code of the organism to which they belong. When somatic cells divide, each new cell is a somatic cell that is genetically identical to the original.

Gametes are created through a process called meiosis. Meiosis takes place within the sex organs. In this process a cell doesn’t divide into two genetically identical cells, as in mitosis. In meiosis, a cell divides into four cells, each containing only half of the organism’s genetic sequence.

The process of interphase, which duplicates the cell’s chromosomes, takes place before meiosis, just as it did with mitosis. In meiosis, however, the DNA within the chromosomes may recombine into new arrangements before the chromosomes are separated into two sets. When cell division occurs, the genetic material will be different in each cell.

The process of meiosis does not end at this point. The two new cells will divide again, but this time without a duplication of chromosomes. When the genetic material in these cells is divided into two sets prior to cell division, each set will will only contain half a set of genetic material.

Because of the complexity of human DNA, and the DNA recombination that takes place during meiosis, a single human being can create millions of different genetic combinations when forming gametes. The number of potential combinations between just two people is nearly infinite, which is why every human being is different, even those from the same parents.

A Comparison between Mitosis and Meiosis With Picture 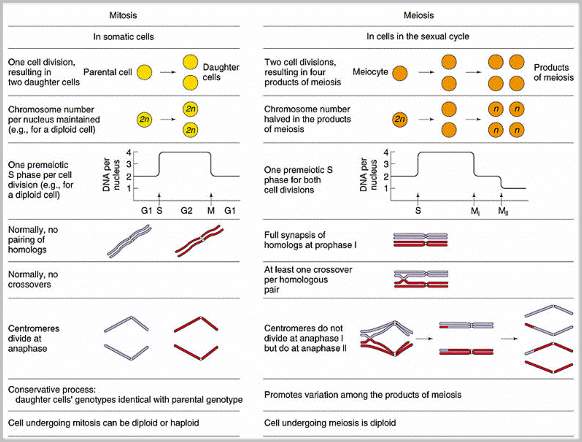 How Gametes are Produced in Meiosis