Symptoms and Treatment of Oral Chlamydia

Chlamydia trachomatis is a bacterium that infects human cells and is an intracellular parasite. As Chlamydia multiplies within, the host-cell may be destroyed, releasing bacteria that will subsequently enter other cells, thus ensuring the reprise of the cycle and the spreading of infection from one cell to another.

Chlamydia is one of the most common sexually transmitted diseases (STDs), responsible for some three million cases in the US every year according to the Centers for Disease Control (CDC). It induces inflammation of the genitals – the urethra (urethritis), the neck of the womb (cervicitis), the fallopian tubes (salpingitis), and the testicles (epididymitis) – but also inflammation of the eyes (conjunctivitis) and lungs (pneumonia) if the infection occurs in the eyes or throat. Sexually active men or women who are infected can pass on the infection to their partners, through having unprotected oral, vaginal, or anal sex with an infected partner (horizontal transmission). Pregnant women can also transmit Chlamydia to their newborn babies during delivery (vertical transmission), with subsequent conjunctivitis and/or pneumonia developing in about sixty percent of these babies.  It can be transmitted from a mother to her baby during vaginal childbirth.  It can also be spread from the genitals to the eyes via the fingertips.  Chlamydial infections occur in both sexes, at any age, and regardless of sexual orientation.

Chlamydia is commonly known as “the silent disease”.  That is because regardless of the site of infection (genitals, mouth, eyes, etc.) it is frequently asymptomatic (has no symptoms.  It can be easily treated and cured with antibiotic therapy, but can have substantial consequences if left untreated over a long period of time. Cervicitis may manifest with purulent or bloody vaginal discharge, pain during sexual intercourse, and redness of the neck of the womb, whereas urethritis may present with urinary symptoms, like urgency and pain, with white blood cells in the urine. Salpingitis can complicate with tubal scarring, chronic pain, sterility, and ectopic (tubal) pregnancy. In severe cases, infection can spread to the pelvis and beyond, causing perihepatitis, with abdominal pain, vomiting, diarrhea, and peritonitis. In men, urethritis presents, in about half of cases, with a burning sensation when urinating and with purulent discharge. When complicated with epididymitis, swollen testicles, pain, and fever are common symptoms; in rare cases, this can lead to male infertility. Conjunctivitis (trachoma) may cause blindness, if left untreated; however, its prevalence is decreasing worldwide.

Oral chlamydia usually presents few if any symptoms.  The infected person may or may not develop a sore throat or a throat infection.  They may or may not develop swollen lymph nodes in the neck.  On rare occasions, the chlamydial infection can spread to the eyes causing conjunctivitis.  If symptoms do occur, they usually appear within 1 to 3 weeks after exposure. 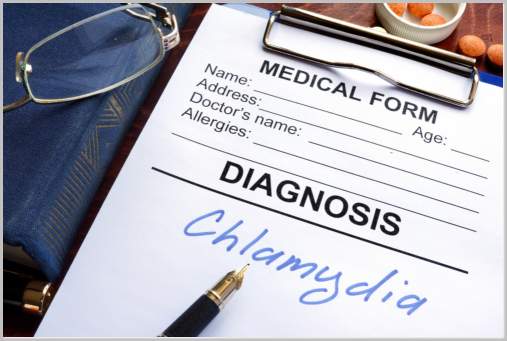 Treatment for a chlamydial infection begins with testing to confirm the diagnosis.  This can be done in one of a few ways.  The least expensive test yielding the most rapid results (usually within 24 hours) is called DNA amplification.  This requires a urine specimen.  It is used for genital chlamydia.  To test for oral chlamydia, a culture swab of the suspected site of infection in the mouth or pharynx is taken.  The swab is then used to grow out a bacterial culture.  This is more expensive than the DNA amplification test, and generally takes 3 to 7 days to get a result.  It is considered the most definitive way of confirming a chlamydial infection.  The last way of testing for a chlamydial infection is called an Amplicor Chlamydia Trachomitis test.  This is also done by obtaining a swab, but the results are available in about 4 hours as opposed to 3 to 7 days.

Screening for Chlamydia is recommended in all non-pregnant sexually active women under 25, at risk of infection. Women at risk are considered those with a history of Chlamydia or other sexually transmitted infections, with multiple sexual partners, who do not use condom regularly, and those who provide sex services for a fee. For pregnant women, screening is variably recommended in those under 25, in those at risk, or in all pregnancy. Tests for Chlamydia (called “nucleic acid amplification tests” or NAAT) are performed on urethral or cervical swabs or voided urine.

Chlamydia is easily treated and cured with appropriate antibiotic therapy like: Azithromycin, Doxycycline, Tetracycline or Erythromycin. A single dose of Azithromycin or a week of doxycycline are the two most common therapy regimens  People should abstain from having sex until 7 days after the completion of their antibiotic therapy to avoid spreading the infection.

Symptoms and Treatment of a Chancre