The other day when I was in the kitchen doing some chores, a pot cover with a almost-sharp edge fell off the counter-top and onto my small toe. Luckily, it was a cover for a small pot, not a large one, so I managed to get away with just a small cut and a bruise. But the incident reminded me of three things…

Considering that a lot of people don’t really know how to effectively stop bleeding when it starts, I thought it’d be a good idea to share my little method. It works pretty well for basic cuts and wounds, so you might want to give it a try the next time to start bleeding. 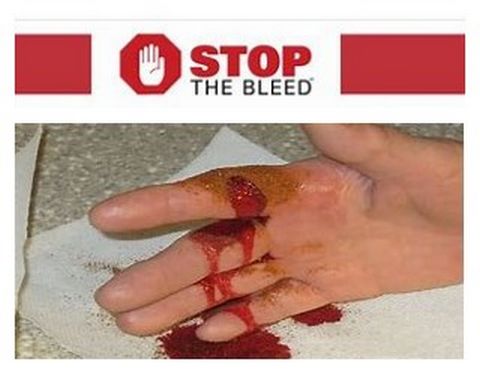 I’m not sure how well it works for larger cuts, but you can use the method almost anywhere and at any time, so it might be a good idea to add this to your arsenal of first aid tricks.

I first thought of this concept when I was a kid, reading a book on… I don’t remember what… But no matter. One of the facts that I read in the book stated that:

It takes blood about two to five minutes to coagulate (though this may vary from person to person).

So I started thinking to myself. If it takes blood two to five minutes to clot, and blood can’t clot properly when I’m bleeding non-stop from the wound, perhaps I could press on the area around the wound for two to five minutes with my fingers to stop blood from flowing out and give it the opportunity to clot.

I tried it the next time I had a bad bleeding cut, and it worked!

The moment I cut myself and saw that it started to bleed, I used my two fingers and applied pressure by pressing the area around the wound to stop blood from flowing to the wound for about 5 minutes. Once I let go of my fingers after that, it didn’t bleed anymore. Needless to say, I was overjoyed by my discovery!

I probably wasn’t the first kid (or person) to discover this, but in any case, here’s my 5 Step Uplif System For Stopping Bleeding Almost Instantly and saving yourself from a lot of pain. It includes a few other tips and tricks you can use in addition to my childhood discovery for stopping the blood flow…

The moment you cut yourself, and it seems to have started bleeding, apply pressure in the area around the wound quickly to stop anymore blood from flowing out. It may hurt to be pressing on the area around the wound, but normally when you cut yourself, the pain will numb the area for a few minutes allowing you to press on it without added discomfort in addition to what you’re already experiencing.

The purpose of the pressure is to prevent the blood from flowing towards the wound and flowing out through it. This gives it time to clot.

Don’t even think of letting go and seeing whether blood will start gushing out… until 5 minutes have passed. I’ve tried it for 2 minutes before, and it seems to work for me. But just to be safe, hold the finger pressure for 5 minutes.

After five minutes have passed, you can slowly release your fingers from the pushing. A bit of residue blood may leak out, but that’s ok. Overall, you should find that the bleeding has stopped. You can use this method anywhere, at anytime. Even if you don’t have a first-aid kit.

In addition to the methods above (this is optional), you can add some tea tree oil to the wound to further help stop the bleeding. I always keep several bottles in my home. Not only is tea tree oil amazing when it comes to helping blood to clot, but it’s also a natural anti-bacterial disinfectant.

Plus, it does a million other things too. Like relieving muscle aches, treating ulcers, preventing nasal blocks and sinus infections, keeping acne away, repelling various insects, healing sore gums, removing plaque, and a ton of other things. If you’ve never tried using tea tree oil (also known by some as a first-aid-kit-in-a-bottle) before, you should really get a bottle for yourself.

Step 4: Turn On The Baroque

Research has shown time and time again that music has a healing effect on the body and mind. This includes research from the UK Journal of Advanced Nursing showing that music can reduce bodily pain by up to 21%. Hospitals are also increasingly using music as a complement to anesthesia for pain relief. Turning on some relaxing music will likely help you to relieve yourself from the pains of your cut or wound.

There are tribes in Africa that use music to heal various afflictions, including stopping the bleeding of fellow tribesmen who have been attacked by hungry lions. So who’s to say that music can’t help stop your bleeding too?

Classical music, and in particular Baroque music, has been shown to  have profound healing properties.

When I get some bad cuts or wounds, I sometimes turn on some Baroque music just to help relieve the pain and try to help the body heal faster. If you don’t have any classical music CDs at home, no worries. Just go to YouTube and browse through their wide selection of easily playable classical music.

So you’ve got a cut and you’ve done all the four steps I’ve listed above in an effort to try and stop the bleeding and heal the pain. What else can you do? Step 5 is the most important step of all. Go to your momma, and ask her if she can give you a big ‘muah’ on your little ‘boo-boo’.

It might seem like a childish thing to do, but a mother’s kiss can go a long way in helping your wound heal. Don’t believe me? Go and try it. Does it feel better? See… I wasn’t kidding.

Why does it work? Some people say it’s the placebo effect. While others vouch for the power of a mother’s love. But regardless of why it works, if it makes you feel better, who cares about the reason… (By the way, I don’t actually do this step, but there are people who do…)

Congratulations! Your bleeding has stopped, and you’re on the road to recovery. The next time you cut yourself and start bleeding, you’ll know how to stop it almost instantly with the 5 Step Uplif Blood Stop System. No matter where you are. No matter what you have on hand.

By the way, I mentioned how amazing tea tree oil is, and how it can be used to heal tons of stuff.  That’s why it’s called a first-aid-kit-in-a-bottle. It can really do that much. Are you curious about what other amazing things you can use it for (other than everything I mentioned above)?

How do Platelets Stop Bleeding