Freshwater lakes are natural bodies of water formed due to rainfall, melting snow, or groundwater seepage in the Earth’s surface. Freshwater life zones are found in bodies of water of which the salt concentration is less than 1%. Approximately 1% of the Earth’s surface is covered with fresh water; however, 40% of known fish species inhabit freshwater. Lakes are divided into three distinct zones which are most commonly determined by depth and distance from the shoreline.  Zones found in freshwater lakes include the littoral, limnetic, profundal and benthic zones. 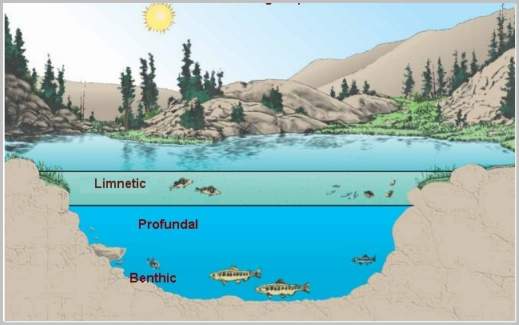 The topmost zone in a lake is the littoral zone, which is the area near the shore. This zone is the most productive since it gets abundant energy from sunlight and absorbs nutrients from land run-off. It sustains diverse biodiversity, which includes various species of algae, floating plants, submerged plants and phytoplankton. The littoral zone is the home of a number of animal species, including frogs, fish, insects, clams, grazing snails and crustaceans. The plants and animals serve as food for other animals, such as snakes, turtles and ducks.

The limnetic zone is the sunlit part of the lake surrounded by the littoral zone. This zone extends at a depth where sunlight penetrates. The vegetation of the littoral zone surrounds this span of open water which lies above the profundal zone. This zone is populated by phytoplankton (microscopic organisms at the upper sunlit layer of a body of water) and zooplankton. Small crustaceans and a variety of freshwater fish also live in this zone. Most photosynthesis occurs in this part of the lake.

The profundal zone is much colder and denser than the previous zones. This zone is located beyond the range of sunlight penetration. This is typically down along the thermocline, the vertical zone through which temperature drops very rapidly. The process of photosynthesis is not possible in this zone. Low levels of photosynthesis leads to low levels of oxygen. The lack of sunlight determines the biodiversity living in this zone, which is particularly distinct from the overlying waters. Organisms in this zone have adapted to cooler temperatures and lower levels of oxygen, as well.

The benthic zone is the very bottom of a lake. Organisms inhabiting this zone are known as benthos. They typically live in a close relationship with the substrate bottom. Many organisms remain permanently attached to the bottom layer of the lake. The benthic boundary layer, which is the superficial layer of soil lining the body of water, contains the nutrients necessary to support an array of microscopic life. This zone is mainly inhabited by decomposers and insect larvae. The benthic zone receives an array of anthropogenic substances released into the environment.

Lakes can be classified into three distinct types: oligotrophic, mestrophic or eutrophic. An oligotrophic lake contains little concentrations of nutrients required for plant growth. Biodiversity is present in very small populations. A eurotrophic lake is rich in plant nutrients, especially phosphates and nitrates. This promotes excessive growth of algae, which along with decomposing organisms deplete the water of oxygen, causing the death of other organisms. Human activity influences this process.  A mesotrophic lake is in an intermediate level of productivity, greater than the oligotrophic, but less than eurotrophic lakes.

A Guide to Ocean Habitats