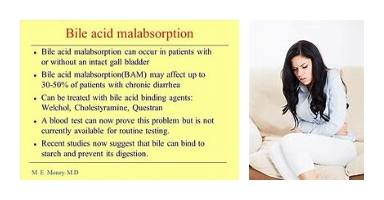 Bile acids are amphipathic molecules (bipolar molecules, water loving and water phobic) produced in the liver and have an important role in digestion of lipids in the small intestine. Bile acids are synthesized in the liver as end products of cholesterol metabolism. The presence of excess bile acid in the colon leads to chronic watery diarrhea where there is an increased fecal loss of bile acids. Though the condition had been noted way back in the 1960’s, there has been no significant progress in detection and treatment. SeHCAT tests are primarily used to diagnose bile salt diarrhea syndrome. To bind the excess production of bile acids, drugs like colestyramine, colestipol and colesevelam are used.
Epidemiology

The exact number of individuals affected is difficult to determine as in most of the cases Bile Acid Diarrhea is often misdiagnosed as Diarrhea dominated Irritable Bowel Syndrome (IBS-D). The first noted case of bile acid diarrhea emerged in 1967 when Alan Hoffman described it in his paper as cholerhetic enteropathy.
In a recent study by physicians from the Rotherham General Hospitals, 304 patients suffering from various gastrointestinal diseases were made to undergo the SeHCAT test (test to determine Bile Acid Diarrhea Syndrome) with a retention of >10% to be considered normal. The results revealed that 97% of the 37 Crohn’s patients with resection, 54% of the 44 Crohn’s patients without resection, 58% of 26 patients with gastric surgery and / or cholecystectomy and a total of 33% out of 197 patients were diagnosed with IBS-D reported retention of less than 10%.
Another study conducted by physicians of the Royal Marsden Hospital, London, surveyed 706 senior British gastroenterologists out of which 62% responded to the survey. Out of the gastroenterologists surveyed, only 6% admitted to investigate for bile acid malabsorption, while 61% considered the diagnosis only in selected patients or not at all.
Misdiagnosis and physicians’ reluctance to conduct tests has resulted in incorrect statistics for Bile Acid Diarrhea. There are approximately 3.9 million adults in the UK being treated for IBS. If we refer to the study mentioned earlier, prevalence of BAM amongst previously diagnosed IBS-D patients would take the number of people suffering from BAD to 500,000 in the UK alone.

IBS-D management therapy can fail on various accounts as not all of the patients diagnosed would actually have that condition. The identification of these specific factors and related treatment causes improvement amongst patients who were earlier diagnosed with IBS-D.

Patients who have undergone Cholecystectomy have higher chances of being affected by bile salt diarrhea. The loss of the gall bladder makes excess bile salts spill over into the colon causing watery diarrhea. There is no specific reason associated with who would get affected by BAD and hence, it is called idiopathic.

HGF19 is a hormone secreted during the digestion process which then enters the liver to suppress bile acid synthesis. Disruption in regulatory function of the HGF19 hormone is another cause of bile salt diarrhea.

Patients with history of digestive tract disease, especially in the ileal region, are exposed to the risk of being affected by bile acid diarrhea.

Bile salt diarrhea goes undetected in many cases as its symptoms are very similar to IBS-D.

The 23-Seleno-25-Homo-tauro-cholic acid (SeHCAT) has been used as the standard diagnostic test for BAD since 1983. The SeHCAT procedure involves patients consuming capsules containing radiolabelled 75SeHCAT. The 75SeHCAT    7-day retention is then mapped through a gamma-camera. Retention of <5% is considered as a severe case of BAD, <5-10% is said to be moderate, whereas 10-15% is considered to a mild case of bile acid diarrhea. Though the SeHCAT test is highly efficient and accurate, it is not available everywhere (it’s not available in the US).

An alternative test for SeHCAT, the C4 test involves checking for the concentration of bile acid intermediate, serum 7α-hydroxy-4-cholesten-3-one (C4) in the peripheral blood. C4 estimates the rate of hepatic bile acid synthesis and correlates it with the rate limiting enzyme of bile acid synthesis known as the cholesterol 7-hydroxylase (CYP7A1). High performance liquid chromatography is used to measure the performance of serum C4.

Another test conducted for confirmation of BAD is the Fibroblast Growth Factor 19 (FGF 19). Abnormal hormonal regulation of bile acid synthesis by FGF19 causes excessive production. FGF19 originates in the terminal ileal region during the digestion process when the bile acid is being consumed. This FGF19 then reaches the liver through the portal vein and suppresses the bile acid synthesis. Fluctuations in FGF19 production causes this process to go awry.

Endoscopic imaging tests like colonoscopy might be prescribed by the physician for differential diagnosis of cancer and colon related diseases. A flexible tube endoscope is inserted in the body through the rectum and images of the colon are observed on a computer screen for abnormal growths.

In countries like the US, the bile acid sequestrants are often used as a diagnostic tool. A patient suspected from suffering with BAD is prescribed a bile acid sequestrant and if the patient responds positively, then it is considered as evidence enough to confirm the BAD existence.

The treatment of Bile Salt Diarrhea has always relied on the oral sequestrants as there is no exact known cause of the disease.

Habba Syndrome – What is, Symptoms Diagnosis and Treatment

Transaminitis – What is, Symptoms and Treatment