What Every Artist Ought To Know About Creating Great Art 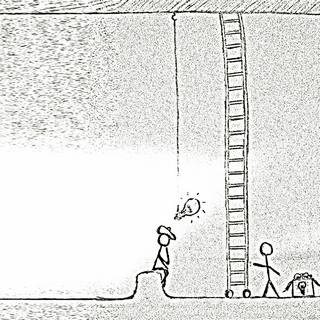 If you yelled continuously for 8 years, 7 months and 6 days, you would be able to produce enough sound energy to heat up a single cup of coffee. It’s possible, but it’s not something that you’d practically want to do. It’s much easier (and less painful on your vocal chords) if you heated up your cup of fresh latte on the stove.

Great art is much the same. There are various ways you can cook up a fantastic piece of art that’s shared and enjoyed by millions. But a lot of the approaches that most artists take are a lot more painful than they really need to be.

It’s not easy being an artist. It’s an occupation that requires a lot of time, hard work, dedication and passion. You might be an artist who has graduated with your art degree. Several art degrees even. You work hard, you try your best to hone your skills, but somehow you just feel that you’re not good enough. You go to several companies, ad agencies, design agencies, looking for a job just to keep your stomach filled… and…

The Farthest You Ever Get Is The Interview

Darn… Another night of having a small order of fries from McDonald’s for dinner. As you sit on the sofa, worrying about tomorrow, you think back to your over 30 years of experience in the art industry. You might have had your own art business at one time, with several employees working for you, bringing you freshly brewed coffee heated up on the stove each and every morning.

One day, it all just disappeared. And the cup of fresh latte went with it.

Is your art just not good enough? Or is your old artistic style just a thing of the past? Perhaps people just aren’t all that interested in art anymore…

Truth is, it’s nothing of the sort. It’s just that… you’re…

Trying To Warm Up Coffee By Screaming At It!

Well, I mean it works, but it just doesn’t work all that well. Doing it the way you’re doing it takes an insane amount of time and you’ll just come out with a wrecked throat. And 8 wasted years.

There’s a much easier way to get where you want to go. And what it takes to get there, quickly and smoothly without all the bumps and screaming… is creating great art!

Art that people’ll talk about. Art that people’ll love sharing with their friends, and looking at again and again. Art that will get you in the door to your next job so you can start having those delicious, mouth-watering turkey dinners every night. And most of all, that fresh cup of latte… Ahhh….

I’m guessing that they probably didn’t teach you this in art or design school. Here’s the thing. Most often, it’s not about the quality of the art itself that makes it a great art piece. It’s the context in which the art appears…

If your artwork isn’t getting you a job, or it’s getting turned down everywhere you go…

The problem most often is not that your skills are lacking. It’s not that you need to brush up on your Photoshop, or Illustrator skills. And it’s certainly not just because you don’t have a Master’s degree or PhD. And no, it’s not because you haven’t been getting enough coffee recently either.

It’s because you’re not looking at the big picture. It’s because the context of your art is a flop.

Your artwork might be good. Your pen might be so powerful that it blows away every sword. But overall, your art can still be a failure because you failed to put it into a brilliant context. You fail to take into account various external factors that can make or break your art.

If you master the skill of putting art in context, you won’t have to look for a job. People will come banging on your doors looking to hire you.

You won’t have to waste time learning how to master the latest digital art software features to create your next piece of work. Even if your art is technically horrible, you can still create art that is wanted and shared by millions simply by putting your art in the right context.

So let’s say you’re an artist who creates bird sculptures. Not just any sculptures though. You make eagle statues. Small ones. And you sell them for $100 each. One day, a movie company hires you to make a special one for them. They decide to call it a falcon statue. Just because it sounds a bit more mysterious. And your statue goes on to be featured in the classic 1941 Humphrey Bogart movie, The Maltese Falcon.

Several years later, that statue you made gets sold for $398,500. It was bought at auction by a fan of the movie.

What happened? You were making $100 sculptures, and all of a sudden you made one that’s so well-loved that it sells for almost $400,000…

It may seem like something that happens accidentally, but you can easily and deliberately alter the context in which your art appears by applying some imagination and placing it in a different setting. It’s a strategy well-used by Sanrio, the company that created Hello Kitty. They occasionally send Hello Kitty items as gifts to various celebrities in order to get their cute character appearing in good settings.

You’ve probably seen the popular image above. It was designed by Jonathan Mak, a 20-year old designer from HongKong, and it went viral the day Steve Jobs died. A lot of people think that the image was designed to commemorate the death of Steve Jobs. But actually, it wasn’t…

It was actually designed as a tribute to Steve Jobs when he retired. He posted the image to his Tumblr blog when Jobs stepped down. It might have gotten him some thumbs ups and shares then, but it was only when he re-posted it after Steve Jobs passed away that it started to gain worldwide attention. The difference is all in the context of the timing.

That one image was posted across the web thousands of times, used on thousands of products, and got several companies hunting Jonathan down and trying to offer him a design job at their company.

You are probably familiar with memes. They’ve taken the internet by storm, and the picture you see above is one of them. If taken by itself, you would hardly consider it a good piece of art.  Perhaps you might think it’s not very well drawn. Nothing worth a second look.

But take the picture above, and add a little story and…

All of a sudden you can’t stop laughing. And you’ve got a piece of art that’s shared by millions, and sold on products around the world.

By changing the context of your art, you can add a story to it. And by adding a story, it takes on a whole new perspective. Even if your art isn’t that good, you can transform it into something completely new and amazing simply by changing its context with a story.

In 2012, the #1 bestselling game in Japan was an RPG game. Surveys have shown that overall, RPG gamers rate storyline as the most important factor when deciding on how good a new game is. This is ahead of various other factors that one would deem important in such games, such as game art and gameplay mechanics.

It just goes to show how powerful a good story is.

So… now that you know one of the most important essences of creating great art, and you’ve gotten tons of examples on how to make your art excel by changing the context to your favor, you’re ready to roll.

Stop reading, take your canvas out, start drawing and painting…

And any time you feel that your art isn’t good enough, remember that the problem might not be with the content. It’s most probably with the context. If you want to be a great artist, you’ll have to take into consideration everything outside of your art as well. No knowledge dwells in seclusion…

The Role of Psychology in Computer Gaming