Areas of grasslands, known as savannas, receive too much water one season and too little water the next. Special animal and plant species live there. These species must tolerate drought and flooding. Only three main places have savannas: Africa, South America and Australia. In South America, three places have them: Brazil, Venezuela, and Columbia. 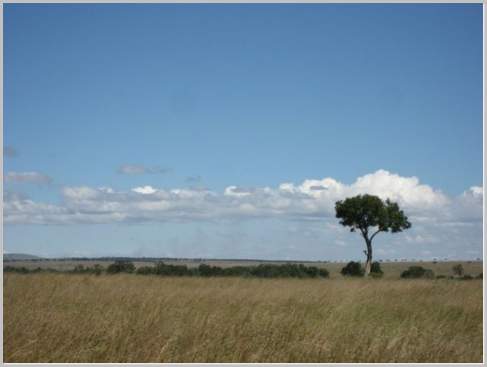 The only plants that live in the savanna are acacia trees and grasses. In Australia, Eucalyptus trees replace the acacia trees. Vegetation must have long roots to tap water far below the surface. The bark of the trees carries water throughout the year even during the drought. The bark also needs to resist fire. The grasses are distasteful to the animals that roam there. Some of the plants grow in such a way that the animals that eat them do not harm them. 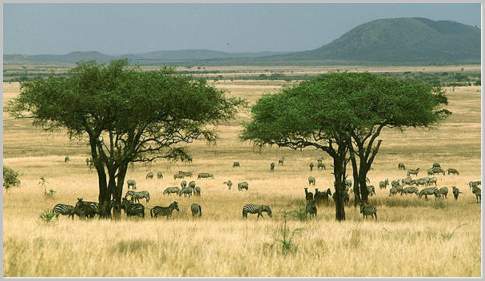 Most animal species feed on different shrubs and grasses than others. They all eat their own favorite meal. Lions, cheetahs, jackals and hyenas each hunt for different animals, so no animal goes hungry. Elephants, deer, along with 40 other hoofed species and 16 herbivores including rabbits, voles, and mice provide food of the bigger animals. The savanna is an excellent hunting ground for birds, especially birds of prey and scavengers. Most animals have large limbs for migrating vast distances. Those that do not migrate burrow far underground, to avoid the steamy summer temperatures. The animal species never overgraze an area like livestock. Wildlife takes care of one another.

In Australia, the only animal that survives the savanna is the kangaroo. It produces many different species of them.

In Brazil, the cerrado is a savanna with twisted trees. It sustains animals not seen any place else.

In South America, plants live in wetlands for much of the time. In other places, people cannot find these species in those locations. Marsh deer and capybara live in the wetland area. Flooding in Columbia Venezuela is a regular part of this ecosystem.

Savannas are not deserts though some creatures can survive for a time in them. They are not forests. Savannas are in between territories. They are hot and steamy like deserts in the summer and wet and warm in the winter. It never gets cold there. Low temperatures are in the 70s.

This biome is unique as little competition for food and resources exist. It provides birds with updrafts for hunting and places to nest when raising young and resting. It is an important place because these animals keep the desert from growing too large.