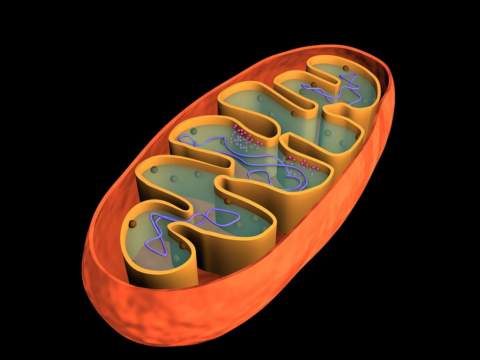 Mitochondria are organelles found exclusively in eukaryotic cells, i.e. protozoa, fungi, plants, and animals. The term ‘mitochondrion’ is derived from a Greek word meaning thread. This accurately describes their appearance in the light microscope, as barely visible thread like structures. Following the invention of the electron microscope, scientists learned that mitochondria have a complex structure that allows them to harness metabolic energy in a useful form.

As an aside, prokaryotic cells (eubacteria, blue-green algae, and archaebacteria) lack mitochondria but maintain a strong evolutionary kinship with them. The biologist Lynn Margulis proposed a now accepted theory that free living, aerobic prokaryotes gave rise to mitochondria over 1 billion years ago, when they were captured by the ancestors of today’s eukaryotic cells. From this perspective, mitochondria (as well as chloroplasts in plant cells) can be thought of as obligate endosymbionts, as opposed to organelles whose assembly is directly controlled by the nucleus. Unlike ribosomes, ER, Golgi, or lysosomes, mitochondria contain their own DNA and ribosomes and reproduce in a manner similar to bacteria. Over time, however, many of the genes encoding mitochondrial proteins have been “captured” and integrated into the cell’s nuclear DNA, reducing mitochondria to a semi-autonomous status.

Powerhouse of the cell

Far and away, the primary role of mitochondria is the metabolism of fuel molecules. Because the entire structure of mitochondria is optimized for the production of a proton gradient, a more accurate description of these organelles would be “the cell’s batteries”. Specifically, mitochondria are the site of aerobic respiration, where sugars and fatty acids are broken down in the presence of oxygen to produce energy in the form of ATP. Carbon dioxide and water are the byproducts of aerobic respiration. As will be explained, far more ATP is generated by the mitochondria than by the cytosolic enzymes responsible for anaerobic glycolysis.

Glycolysis, sometimes called anaerobic respiration, is the first phase of sugar breakdown at the cellular level. Simple sugars such as glucose, fructose, and galactose are converted to a three carbon compound called pyruvate. Because this process occurs in the cytosol and does not require oxygen, it is termed anaerobic. The net energy yield from anaerobic respiration is two molecules of ATP. In the absence of oxygen, pyruvate is converted to lactic acid, which is a metabolic dead end in mammalian cells. Although lactic acid can be converted to pyruvate and pyruvate back into glucose, this requires the hydrolysis of additional ATP.

Some unicellular organisms like yeast and most bacteria can survive by anaerobic respiration alone, but human cells cannot. In the presence of oxygen, pyruvate enters the mitochondria (see image), where it is broken down by an enzyme complex called PDH (pyruvate dehydrogenase). PDH catalyzes an irreversible reaction in which pyruvate is converted to carbon dioxide and a two carbon acetate unit bound to a carrier molecule called coenzyme A, referred to as acetyl CoA for short. Fatty acids are directly broken down into acetyl CoA by a process called beta oxidation (which also requires oxygen).

Regardless of its original fuel source, acetyl CoA enters the mitochondrial matrix, where the enzymes of the Krebs cycle harvest its energy by generating the electron carriers NADH and FADH2. These high energy electron carriers, derived from B vitamins, release the electrons, which are then shuttled through a series of iron containing protein complexes called cytochromes. The cytochromes and their associated cofactors, collectively known as the electron transport chain (ETC), are embedded within the inner mitochondrial membrane. The flow of electrons is absolutely dependent on the presence of oxygen, which serves as the final electron acceptor. Without oxygen, the ETC along with the Krebs cycle and acetyl CoA production would all grind to a halt.

The ETC couples the flow of high energy electrons to the transport of protons into the space between the inner and outer mitochondrial membranes. The resulting proton gradient drives the synthesis of ATP as protons flow back into the mitochondrial matrix through a protein complex called ATP synthetase. The energy yield from aerobic respiration is approximately 34 molecules of ATP produced per molecule of glucose metabolized. This represents a 17 fold increase in energy production compared to the ATP yield from anaerobic respiration/glycolysis.

In a sense, the mitochondria act as microscopic proton batteries powered by the break down of fuel molecules into carbon dioxide and water. This process can also be viewed as a form of enzymatic combustion, in which carbon rich fuel molecules are burned in the presence of oxygen to yield useful chemical energy in the form of ATP.

Mitochondria are also responsible for the initial step of steroid hormone production. Some contain an enzyme called CYP450 SCC (side chain cleavage), which converts cholesterol to pregnenolone. This specialized function is restricted to mitochondria in the adrenal cortex, testes, and ovaries. Subsequent steps of steroid hormone synthesis are catalyzed by enzymes located in the smooth endoplasmic reticulum (sER).

Finally, mitochondria in specialized adipose tissue called brown fat generate heat by short circuiting the electron transport chain. As in other cells, these mitochondria burn fatty acids aerobically. The major difference is these mitochondria contain a specialized protein called thermogenin, which allows protons to flow from the intermembrane space back into the mitochondrial matrix without having to pass through the ATP synthetase complex. As such, these mitochondria produce heat at the expense of ATP production. This process is not wasteful, however; the heat generated by brown fat ensures that arterial blood remains liquid even at low temperatures. By extension, lipolysis of brown fat helps maintain core body temperature.

Structure of Mitochondria in Animal Cells

An Outline of how Energy is Transferred by Respiration