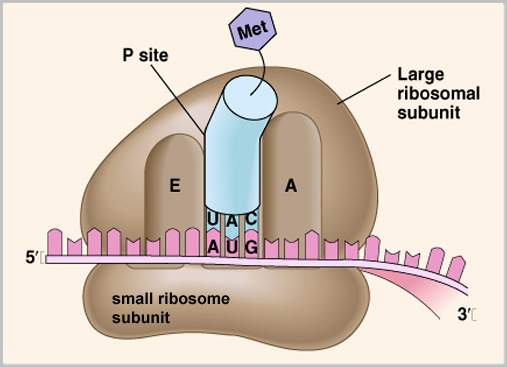 Ribosomes are tiny cellular workshops where proteins, also known as polypeptides, are assembled, in the process known as translation. Messenger RNA, or mRNA, transcribed from DNA, is the template for synthesis of proteins essential for biological function. During translation amino acids are joined together to form a linear polypeptide chain. Some proteins are manufactured on freestanding ribosomes and remain inside the cell. Other proteins are made on ribosomes attached to the surface of the endoplasmic reticulum, a network of membranes and vesicles within the cell. These proteins may be dispatched to the cell membrane or exported for work outside the cell. Ribosomes facilitate protein biosynthesis through recognition of each triple-base codon on the mRNA to be translated. Each codon indicates a specific amino acid to be added to the polypeptide chain. Ribosomes also possess an enzymatic activity responsible for connecting each new amino acid to the growing polypeptide chain. They move along the mRNA in the 5′ to 3′ direction, allowing for the addition of amino acids in a linear fashion.

Ribosomes are protein/RNA complexes made of two subunits. The enzyme peptidyl transferase is located on the larger ribosomal subunit, and catalyzes the formation of a peptide bond, the bond that joins two amino acids. At the beginning of translation the smaller subunit binds to the 5′ end of the mRNA, moving in the 5′ to 3′ direction, scanning the mRNA until it reaches the initiation codon AUG. Here an initiator transfer RNA (tRNA) carrying the amino acid methionone (Met) binds to the initiation codon on the mRNA. Each tRNA contains a single amino acid and an anticodon complementary to the codon of the mRNA. The larger subunit then associates with the smaller subunit for a completed ribosome, and features two binding sites for tRNA, the Aminoacyl (A) site, and the Peptidyl (P) site. Now the Met tRNA is in place, on the P site of the ribosome, ready for another amino acid.

Next a new tRNA molecule containing an amino acid complementary to the next mRNA codon is directed to the A site by proteins known as elongation factors. The anticodon of the tRNA must be complementary to the mRNA codon if chain synthesis is to continue. The ribosome stabilizes the initiating Met tRNA at the P site and the second tRNA at the A site while peptidyl transferase catalyzes formation of a peptide bond. Met then disassociates from the initiating tRNA, leaving one tRNA at the A site with two amino acids attached to it.

The ribosome now moves on to the next mRNA codon. Movement of the ribosome requires an input of energy from ATP. As the ribosome moves, the tRNA carrying the dipeptide shifts from the A site to the P site, and a new tRNA containing an amino acid complementary to the next codon is directed to the empty A site. Peptidyl transferase then catalyzes formation of a second peptide bond, generating a chain of three amino acids. Assembly continues in this manner until the polypeptide is complete. More than one ribosome can participate in polypeptide creation, so that many copies of a protein can be produced from a single mRNA. Stop codons, or nonsense codons UAG, UAA, or UGA, signal the end of protein synthesis. Release factor proteins aid in the disassociation of the ribosome from tRNA, mRNA, and the new polypeptide.

Ribosomes provide a construction site for the building of proteins. Without ribosomal scanning of mRNA, codon-anticodon matching would be a difficult and inefficient process, messenger RNA instructions would go un-translated, and proteins could not be synthesized. Without the catalytic activity of peptidyl transferase, the activation energy required for bond formation would be too great. Proteins perform the work required for survival of the cell, including cell division, metabolism, and cellular respiration. Life as we know it would not be possible without proteins, and proteins would not be possible without that itty-bitty little cellular entity known as the ribosome.