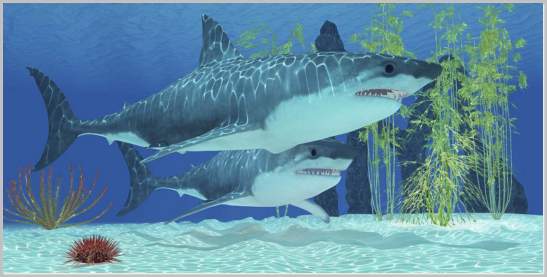 The Megalodon was a gigantic prehistoric shark that was the top predator during its era. It lived between 18 and 1.5 million years ago and was the largest predator to have ever lived in the sea other than the modern day sperm whale. However despite this huge predator having been extinct for over one million years, sightings of this shark are still made every year, leading some to believe that it may still be alive out in the oceans.

To look at the Megalodon was similar in appearance to a much bigger great white, which reach lengths of about 20 feet. The Megalodon reached lengths of around 60 feet by comparison, and weighed in at over 50 tones. Due to its similar shape and appearance to the great white, it probably tended to stay in relatively shallow water, and around places where marine mammals were abundant.

It probably ate whales and other large fish which is captured by either ambushing or chasing down. Given that it was so large, it probably used similar tactics to the great white whilst hunting its prey. That is to ambush and attack prey with a single bite, usually with the goal of weakening it or causing significant blood loss. From then the shark circles around the prey until it either dies from blood loss, or is too weak to fight back.

Some people have dismissed these as great white sightings, but the Megalodon could have swallowed a great white whole, so this seems unlikely. Being up close even to a large great white shark however is probably a very scary experience in itself, so a lot of sightings may well be embellished somewhat.

Outwardly it looks as if it is quite unlikely that they could have survived all this time without being detected, as well as the fact that there are fewer large whale species today that they could feed on. However if it had adapted to being a deep sea dweller it is possible that it could well still be down there, as there are many thousands of species there that are yet to be discovered.

The colossal squid for example is another extremely difficult to see species that was only recently proved to exist. If the Megalodon is alive it may well feed on species like the colossal squid as well as whales and other deep sea marine life. In many ways similarly to the sperm whale, which again is rarely seen except for when it surfaces to breathe, something which a shark wouldn’t ever need to do.

Using the sperm whales behavior and feeding habits as a basis it seems plausible that such a species could survive in today’s oceans quite happily. Also having gills rather than having to take in air would mean that it would never have to surface as sperm whales do, making sightings unlikely. However fish rather than mammal species in deep water tend not to be active and fast moving.

One thing that counts against it however is that the oxygen content of deep water is very low, meaning large species that live constantly in the depths, rather than diving, tend to be very slow moving and sluggish. All of the currently identified species of deep-water shark certainly are less active then their shallow water counterparts and are usually scavengers rather than active predators.

Using the Greenland shark as an example instead of the Sperm whale doesn’t seem to fit as well if the Megalodon is the same as it once was. The Greenland shark is the largest known deep water shark, but due to the fact that there is relatively little to eat in deeper waters, it is also sluggish and lazy. Rather than being a predator it also tends to be more of a scavenger, feeding on the corpses of whales and the like that sink to the ocean floor. 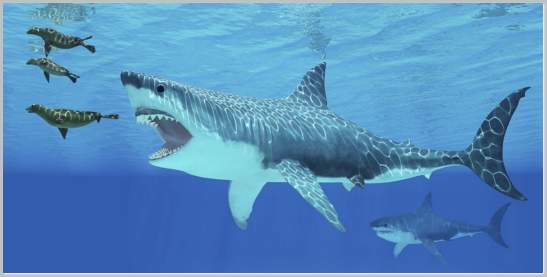 Also given that the Megalodon was probably a shallow water shark, as well as being a top predator, it seems likely to have occupied the niche currently taken up by the great white shark in the food chain. This also makes it very likely to have come into contact with mankind numerous times, which it hasn’t. Typically most of the other large sea creatures of the time that it fed on and competed with also died out, including some which were seemingly more suited for survival during transitional periods.

The Megalodon was thought to have died out mainly due to climactic shifts during the last few thousand years that it existed. Several ice ages as well as a general cooling of the seas at that time meant that many of the larger species in the seas died out. This in turn made the whales and other marine mammals change their migratory patterns and lead them into the colder seas where the Megalodon could not successfully breed. Large whale species were more resilient to these changes due to the fact that mammals are better equipped to deal with climate changes than fish species.

Secondarily massive glaciers building up over huge areas of the surface of the sea meant that sea levels dropped by as much as 100m. This meant that the warm coastal areas which the Megalodon used for breeding were no longer accessible, and so less of the individuals could successfully procreate. Over time this would have lead to a massively reduced population, which with other factors could have meant extinction.

The sightings that there have been in recent times of a huge shark that by sight far our-weighs the largest great white or basking shark have also been typically been made by fishermen. Who of course are used to seeing sharks and other marine life everyday, so it is unlikely that they would embellish or make up the stories as some people might.

There was even a case where the fishermen of a particular wharf refused to go out to fish for a week as there was a massive shark they had seen that was swallowing their crab and lobster pods whole, which is something that nothing apart from a sperm whale could do, except that the water was far too shallow for a sperm whale to be there.

Overall it is possible that the Megalodon or even some other huge shark species is out there waiting to be discovered. The Greenland shark for example may well be slightly larger than the great white as it turns out, so a similar species to this could well grow a lot larger. Also the witnesses to these types of sightings had no reason to lie about what they saw, or in the case of the fishermen to take away their own income for no reason.

Supposing that the Megalodon was to have had its population reduced severely at the end of the last ice age, then it is possible that a small number continued to live on in a remote area. For example in the middle of the larger, warmer oceans where mankind rarely travels there might be all manner of undiscovered species. In places such as the shipping lanes, smaller vessels don’t generally pass through very often, and the larger shipping vessels would likely scare away any fish in the immediate area into deeper waters.

Is the Megalodon Extinct