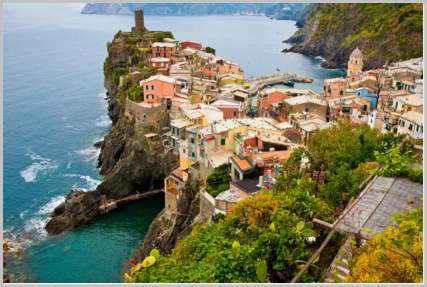 The Mediterranean Climate has hot, dry summers and warm, wet winters.  This is the summary description used by many teachers, when trying to make it easy for their students to remember the climate’s main characteristics.  In fact it is an accurate summary.

Others describe the climate area in terms of its vegetation and dominant crops.

A classic Mediterranean climate is found in only a few parts of the world.  Its correct climatic classification is Warm Temperate Western Margin and this restricts it to regions between 35 and 45 degrees of latitude, north or south, and near to a west coast.  The regions are the borders of the Mediterranean Sea itself, parts of southern California, parts of coastal Chile, the western Cape of South Africa and South West Australia and the area of South Australia which also faces westwards.

Another method of instilling facts about this climate, used by some teachers, is the approximate 25, 50, 75 rule, only applicable before metric measurements came into use.  This relates to an annual 25 inches of rainfall, 50 F as an average winter day time temperature and 75 F as an average summer day time temperature.  Using centimetres for rainfall, and degrees Celsius for temperature rather spoils this pattern, although it is generally accurate, as far as averages go.

The seasonal rainfall pattern is particularly distinctive, with virtually all of it falling during the winter months, that is to say between late October and April.  Summer rainfall tends to be infrequent and falls largely as heavy, thundery showers.

Winters are often affected by onshore winds, bringing considerable moisture and rain, whereas summers are normally dominated by high pressure, and therefore have long periods of stable, still and clear weather.

The natural vegetation of Mediterranean areas is scrubland, varying in species from continent to continent, but dominated by drought resistant plants like aromatic species such as rosemary and thyme, and other long rooted or thick leaved varieties.  On limestone areas of Mediterranean France the vegetation is known as garrigue, but similar dry scrubland has different names in other countries.

Crops similarly need to be drought resistant, or otherwise well irrigated.  The climate is too dry for cereal crops and the main productive species are vines, olives and citrous fruits.

As the world climate changes, the areas where vines can grow is tending to spread further north and south of the equator, to England in Europe, and further north than central California in North America.  So whereas a map showing olive and vine growing could be taken as an accurate depiction of a Mediterranean climate a few decades ago, this is no longer the case.

The simple climate pattern, contrasting hot and dry and warm and wet still prevails however, and the average temperatures and rainfall totals have changed little, although the latter are tending to get lower and are becoming more variable over time.