Functionalists believe that religion is beneficial for both society as a whole and it’s individual members, for example it unifies society, which in turn gives each individual member a source of support when they need it. However some theorists disagree with the functionalist ideology.

Firstly, functionalist claim religion benefits society in a number of ways, they say it creates a sense of social solidarity, meaning a shared sense of identity, history, norms and values (a collective conscience). Functionalist explain that if all of a societies members are part of the same religion then they all share the same belief system, resulting in consensus between all of its members. The religious institution will teach it’s members the norms and values of the society they are in and the collective worship will bind societies members closer together, for example, people in Muslim countries who are part of the faith of Islam, understand it is normal to stop and pray 5 times a day and also that no-one should work on Friday however people in Christian countries understand the day of rest to be Sunday. Functionalist therefore claim members of a society have a collective conscience, they think in the same way, due to their shared norms and values. 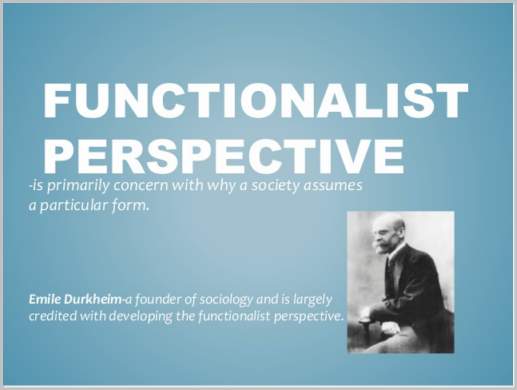 Functionalist also believe that religion unifies people, the functionalist Emile Durkheim studied a clan society called the Arunta, he explain that the collective worship of the sacred totem by the Arunta united society. He explained their totem is sacred, it inspires feelings of wonder and awe due to the fact it is different to every other normal, profane item. Their totem is a symbol that makes them different to other clans so in effect it is like they are worshipping a symbol of their society even though they are unaware of this. They worship their society because they are completely dependant upon it, they are utterly dependant upon each other and their religion unifies them.

Some sociologist criticise how functionalists neglect the fact there are multi- faith societies, however a functionalist called Robert Bellah believes he can provide an answer for this, he claims that these societies have a common belief system called civil religion. Civil religion is a religion that attaches sacred qualities to the society itself. “Americanism” (the American civil religion) unites every American in a way individual religions cannot. To be an American you must be loyal to the nation state and believe in a God. Americanism is expressed by pledging allegiance to the flag, singing the national anthem and symbols such as the Lincoln memorial all of which are similar things to what can be found in ‘real religions’. It binds people from many faiths and backgrounds together.

From a functionalist perspective religion helps individual members of society in a number of ways. Firstly it provides a sense of being part of something greater than just yourself, for example in the Christian faith, when someone becomes a Christian they are then part of a bigger Christian family this can also provide support for an individual in times of trouble.

Also religion provides answers to ultimate question such as ‘where do we come from?’ ‘Why are we hear?’ or ‘what happens to you when you die?’ Bronislaw Malinowski says that religion helps individuals deal with emotional stress that has the potential to undermine social solidarity; it acts as an emotional crutch. He says religion helps to minimise disruption in life crises, for example when someone dies it gives people an answer for where they’ve gone and why they died, e.g. they’ve gone to a better place.

However, there are some criticisms of the functionalist view of religion, for example functionalism fails to realise the conflict that can be caused by religion, for example the conflicts in northern island between the catholic and protestant faiths. Also functionalism fails to see the oppression of the poor and women. Another criticisms is that in multi-faith societies different religions teach different things and have different norms and values, sometimes resulting in confusion, this means there is no longer a collective conscience and everyone doesn’t think in the same way. Furthermore, some would argue civil religion isn’t a real religion because it isn’t based on belief in the supernatural.

In conclusion, functionalists believe religion can be seen to benefit the whole of society by creating a sense of unity and solidarity; and the individual by answering ultimate questions and acting as an emotional crutch, but this view is maybe dated. Some criticisms are that in modern day multi-religion societies different religions teach of different origins and different norms and values taking away the sense of unity and solidarity. Also Marxists would argue that religion only benefits the ruling class, confusing the proletariat and making them think their inferior position is god given and acceptable. On the other hand, feminists would argue that religion solely benefits men and subordinates women.

Religion and Theology Religion in the Future