Difference between Heliocentric and Geocentric Models of the Universe 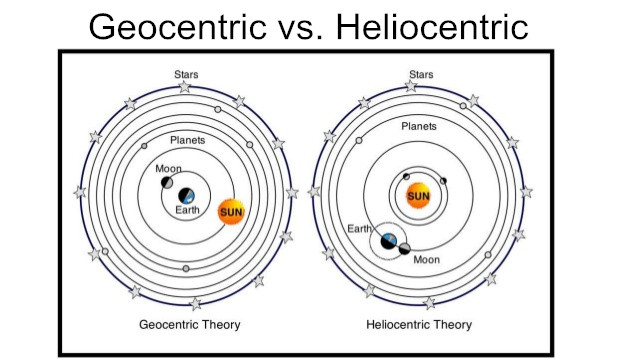 – Geocentric Model of the Universe –

The geocentric model of the universe, also known as the Ptolemaic model, was widespread beginning in Ancient Greece and holds that the Earth lies at the centre of the universe, with all other objects circling it. This is most intuitively obvious in relation to the Sun and the Moon, which, to an observer on the surface of our planet, do seem to follow regular circular paths over our heads. It is a seemingly empirical conclusion based on the evidence that celestial objects (including stars) circle the sky above us, while the ground beneath our feet appears to be at rest.

Plato and Aristotle both wrote extensively about a geocentric universe, but is best known for another advocate, Claudius Ptolemaeus, of the Roman era. According to Ptolemy, objects orbited the Earth in distinct concentric circles, or spheres. Within these spheres, furthermore, they actually followed elliptical paths within another sphere, called an epicycle. This added complexity was necessary to account for the fact that, viewed from Earth, close objects like the planets Venus and Mars sometimes seem to stop and even to move backwards in the sky.

– Heliocentric Model of the Universe –

Despite the best efforts of geocentric scholars in the medieval and Renaissance worlds to account for these strange perturbations, the geocentric model had serious flaws. These were conclusively exposed beginning in the 1500s by four European astronomers: Johannes Kepler, Tycho Brahe, Nicolaus Copernicus, and Galileo Galilei. These men’s systematic observations of the sky indicated that, if indeed objects followed the orbits prescribed by the geocentrists, they could do so only through the arbitrary random intervention of some outside force.

Theoretically there was no reason why God would not choose to move the planets any way he liked, but there was a general assumption that he had probably arranged the universe according to predictable natural laws. Although Copernicus and Galileo were astronomers and not theologians, it is important to recognize that their period was a deeply religious one and therefore that such theological questions did carry some significance. Galileo is particularly noted for attracting persecution by the church for his beliefs, although in truth he could likely have published his views without retribution had he not chosen to write them as a “dialogue” between a wise and effective debater representing his own views, and an incompetent opponent modelled after the Pope of the day.

In any event, the transition from geocentrism to heliocentrism was not a sudden or smooth one, but the four men were able to demonstrate that the movements of the planets were better explained by a model in which all of them (including the Earth) followed predictable elliptical paths around the central Sun, rather than all of them following the complex Earth-centered circles-within-circles orbits of the Ptolemaic system. Galileo’s further discovery that Jupiter had moons, which orbited Jupiter rather than Earth, was final proof that the Earth was not a special central location around which all other things orbited.

Heliocentrism was under attack essentially since it was formulated, with mystics like Giordano Bruno arguing that if the Earth were not the centre of the universe, it was senseless and arrogant to assume that the Sun was. It took several centuries for these views to gain full credibility among scientists, however.

By the twentieth century, however, the discovery of other galaxies confirmed that neither our planet, nor our sun, nor even our galaxy can be said to occupy a special position relative to other objects in the universe. Indeed, even within our solar system the Sun itself moves or ‘wobbles” around the central point because of the gravitational influence of the planets, especially Jupiter. Philosophically, the death of heliocentrism is a logical consequence of the theory of relativity as well as of the principle of mediocrity, although most commonly it is referred to as the Copernican principle. Despite being a heliocentrist, Copernicus’s name is given to the concept because he was among the first to demonstrate that the Earth was not the centre of the universe.

Astronomy what was the Heliocentric Model of the Universe

The Biggest Problems with the Geocentric Model of the Universe