Every living organism has the building blocks of life known as the cell. As you know, there are two types of cell, the prokaryotic and eukaryotic cell. The major difference between the two is the presence of several organelles. A prokaryotic cell does not have a membrane-bound nucleus, mitochondria, and other tiny organs that eukaryotic cell possess. Nonetheless, both cells have a cytoplasm that provides an important role in every organism’s life. For this reason, learning the various structures and functions of the cytoplasm will give you a better view of the importance of this cell part.

Cytoplasm Definition: What Is? 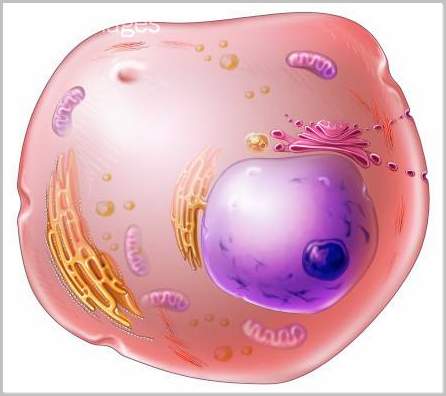 In 1835, Robert Brown along with other researchers discovered the cytoplasm, a colorless gel-like fluid that fills the area between the cell membrane and the nucleus. Being a gel-like substance, the cytoplasm is made up of water (70% to 90%) and salt.

The cytoplasm has two types, namely the endoplasm and ectoplasm. The endoplasm is the granular (consisting of small grains) region at the inner part of the cell. The ectoplasm, on the other hand, is the non-granular part found in the outer region of the cytoplasm.

Within the cytoplasm are several structures with different functions. As such, this semi-transparent space of the cell plays a vital role in various metabolic pathways and cellular processes such as glycolysis and cell division. However, that is not the only function of the cytoplasm. It has numerous roles, which will be explained as you read further.

As mentioned, within the cytoplasm are various structures that have important roles in the proper functioning of the cell, which includes the following:

The cytosol is the aqueous space between the various organelles present in the cytoplasm, which is about 70% of a cell’s total volume Various molecules are present in this cell part such as soluble proteins (proteasomes), salt and water. In addition, the cytosol also contains fatty acids, amino acids, carbohydrates, and enzymes.

Aside from molecules, also found in this fluid substance are filaments (a long chain of proteins) that form the cytoskeleton, which gives shape to a cell and holds the various organelles. The cytoskeleton has two structures, which are microfilaments and microtubules. The main role of microfilaments is to assist the movement of various substances in the cell, whereas the microtubules help the organelles to move.

An organelle is a little organ that has a specific role in the cell’s survival. The various organelles in the cytoplasm are Golgi apparatus, endoplasmic reticulum, mitochondria, ribosomes, vacuoles, and lysosomes. A plant cell has an additional organelle, which is chloroplast.

Golgi apparatus or Golgi complex is made up of cisternae or flattened tubes or sacs. The main role of this organelle is to pack and transport proteins to various locations in and out of the cell. In addition, this cytoplasm structure plays a role in the transportation of lipids in the cell.

The endoplasmic reticulum is the sac-like organelle present in the cytoplasm, which is also composed of cisternae. This organelle has two types, the rough ER where ribosomes are attached, and the smooth ER that does not have any ribosomes.

One of the primary roles of this organelle is to transport proteins to the Golgi complex. In addition, it also aids in the synthesis of steroids and proteins. Lastly, it also has a role in producing and storing glycogen, the stored form of glucose.

Known as the powerhouse of the cell, the mitochondrion is present in most eukaryotic cells. The main function of this organelle is to produce and store adenosine triphosphate (ATP), the energy-carrying molecules of living organisms.

Ribosomes are the organelles where protein synthesis occurs. These structures can be found moving freely within the cytosol or attached to the rough ER.

A ribosome has two components, namely the small and large ribosomal subunit. The large subunit forms polypeptide chains by joining the amino acids, while the small subunit reads the mRNA.

Vacuoles are sac-like organelles that have no definite shape and contain water, enzymes, and molecules. Vacuoles have varying functions depending on the type of cell. Usually, the main role of this structure is to isolate and store waste materials. Moreover, it also maintains the acidic pH of the cell.

Commonly found in animal cells, lysosomes have enzymes that break down waste products and dead organelles.

As a vital structure of a plant cell, the chloroplast is responsible for carrying out the process known as the photosynthesis. This process occurs when chlorophyll gets energy from the sun and transform the energy into an organic molecule. Aside from photosynthesis, this organelle has a role in producing fatty acids and amino acids.

In the cytosol are insoluble tiny molecules known as cytoplasmic inclusions. These molecules are grain-like particles, however, they are not enclosed in a membrane. These particles will vary depending on the type of the cell.

The most common inclusion is the lipid droplets that act as the storage area for lipids such as sterols and fatty acids. In a plant cell, its cytoplasm has inclusions ranging from crystals of silicon dioxide or calcium oxalate that stores glycogen and starch.

Cytoplasmic inclusions contain nutrients that a cell can use when needed. Aside from that, it can also store waste materials, a cell can eliminate through exocytosis.

Although the cytoplasm is a simple structure of the cell, it provides numerous significant functions, which includes the following:

Without the cytoplasm, a cell is an empty membrane with a flat shape. Keep in mind that this jelly-like substance holds the various organelles and protects these tiny structures from colliding with each other. The cytosol has several compartments enclosed by a membrane, so each organelle has a space of its own.

This semi-fluid part of the cell allows the occurrence of cytoplasmic streaming, a process of transporting nutrients, proteins, metabolites, and genetic information from one organelle to another. This process is possible because of the microfilaments of the cytoskeleton.

Various biochemical reactions occur in the cytoplasm that is vital for the proper functioning of the cell. Examples of these processes are protein synthesis, cytokinesis, anaerobic glycolysis, and cell reproduction.

Aside from that, each organelle in the cytoplasm has specific roles necessary for the cell’s survival and optimum performance. Cell division, growth, and expansion are examples of the processes performed by these organelles.

Finally, the cytoplasm has enzymes that help in the breakdown of macromolecules required by the organelles. An example is the enzyme pyruvate that breaks down glucose needed by the mitochondria. Aside from glycolysis, pyruvate is also a catalyst in the synthesis or production of amino acids and fatty acids.

Because of the cytoplasmic inclusions, a cell can store surplus nutrients that organelles can use when necessary. In addition, these inclusions can also store metabolic waste products until the cell can dissolve and get rid of these substances.

Aside from the transfer of various substances, the microtubules of the cytoskeleton assist in the movement of the organelles. Lastly, this cell part also helps in dissolving waste materials and in getting rid of these substances.