Characteristics of the Saurischia Order of Dinosaurs

The Characteristics of the Sauriscia order of Dinosaurs 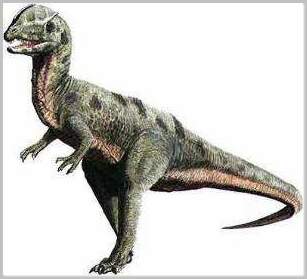 The main characteristic that sets Saurischian dinosaurs apart from the ornithischian dinosaurs is their pelvis, which is arranged in a similar way to the pelvis of modern day lizards. The lizard-like pelvis of the saurischian dinosaurs is interesting. It has the pubis facing towards the front of the animal, as opposed to the ornithischians, which have a pubis pointing towards the back of the animal like a bird. It is commonly accepted now that birds most likely evolved from saurischians, specifically theropod dinosaurs, instead of the bird-hipped ornithischian dinosaurs. It is believed that, in an example of convergent evolution, the “bird hips” actually evolved twice, once in the ornithischians and once in the descendants of theropod dinosaurs, the birds. This is probably thanks to a similar situation that required both ornithischians and birds to have a similar hip structure. Saurischians do not have the stiff tails of their ornithischian cousins because they lack ossified (Bone-like) tendons. The Saurischians are split into two groups, the Sauropodomorphs and the Theropods. The Sauropodomorphs include the huge long-necked dinosaurs like Brachiosaurus. The Theropods, on the other hand, have all of the meat-eating dinosaurs like Tyranosaurus rex and Velociraptor. This is the branch that birds evolved from.

The Saurischians are a very diverse group of very interesting dinosaurs. Most of the dinosaurs that most people are aware of come from this order of dinosaurs. The infamous T Rex is a part of this very interesting group, as are others like Velociraptor, Brachiosaur, and Diplodocus. Oviraptors, or egg thieves, are also a member of this diverse order. Just because they have sharp teeth or a long neck does not necessarily make the part of the Saurischia order of dinosaurs. By definition, the dinosaur has to have the lizard-like pelvis or else it does not count. If it has a different pelvis, it is put in with the ornithischian dinosaurs. Likewise what a dinosaur eats or how it walks is not enough to put it into one order or the other. The pelvis is the key.

Characteristics of the Ornithischia Order of Dinosaurs