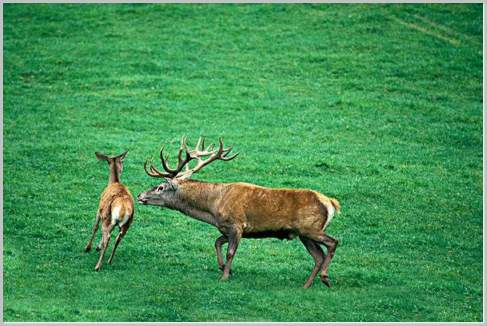 Whitetail deer are interesting mammals and their breeding habits are unique. Deer breed in relation to the average climatic conditions in an area.  In most regions, deer will breed in the fall to take advantage of spring and summer weather to allow the fawn to be old enough to withstand the rigors of the following winter season. Does normally do not mate the first year of their life, but if nutrition is excellent, there may be exceptions. The gestation period is approximately seven months.

The mating ritual is very demanding on buck deer.  Prior to the doe coming into estrus, the bucks will have developed a full set of antlers covered by velvet.  The velvet carries the blood supply to the antlers as they are formed.  As mating season (known as the rut) approaches, the velvet will be shed as the bucks rub their antlers on shrubs and small trees. These rubs on trees appear like trail blazes and marks a buck territory. Other bucks will see these signs and check them. The rubs will have scent from the pre-orbital glands near the eyes.  In addition, the bucks will begin to make scrapes. They will paw the earth, removing grass and leaves and urinate in the bare spot. As they urinate, they will bend their back legs together to allow urine to run over their tarsal and metatarsal glands to place the scent in the scrapes.

As the mating season draws nearer, bucks will spar and some battles become serious enough that bucks can break antlers or even be gored. These injuries can result in death. On rare occasions, bucks can lock antlers and eventually both will die.

Once the does enter estrus, the bucks will chase them and the dominate bucks will breed the does. Subordinate bucks will hang around, hoping for a chance to breed a doe while the dominant buck is occupied with a conflict with another buck. The buck will stay with the doe as long as she is in estrus.  When she is past estrus, he will leave to seek another doe.

Most does are bred in a short time period, but some younger does may not enter estrous until a month later than the mature does.  These will be bred at that time.

Does will have one or two fawns.  They will have spots for several months after birth and will have very little scent.  They will hide for a couple of weeks and the doe will visit several times daily to feed them until they are strong enough to follow her.

Antlers are not only defensive and offensive weapons, but they are used to dominate other bucks and impress does during the breeding season. After breeding has passed and late winter arrives, antlers will be shed until spring when they will begin to grow again.  These sheds are hunted by people as trophies and used for display or crafts.