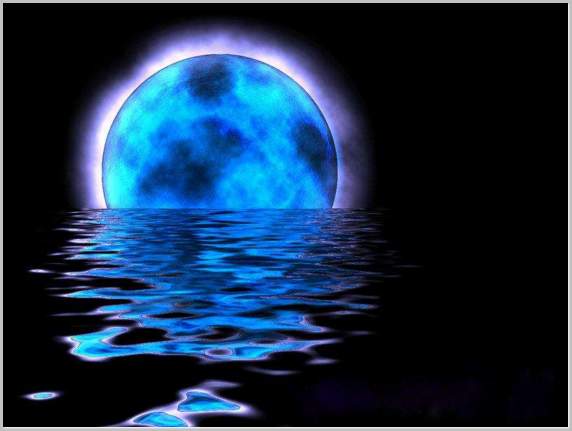 The phrase “Blue Moon” has been around for hundreds of years and its meaning has gradually changed over time. Back in 1528, an anonymous poem went like this: “Read me and be not wrothe, For I say no things but truth: If they say the Moon is blue, We must believe that it is true.”

Paradoxically what this is saying is: don’t believe all you hear. Our modern day equivalent would be “the Moon is made of green cheese” implying a groundless belief that can easily be disputed.

It is possible for the Moon to appear to look blue but this isn’t anything to do with the Moon itself. Occasionally, dust or smoke thrown up by major volcanic eruptions high into the Earth’s atmosphere scatters moonlight in all directions giving the Moon a blue tinge.

A common phrase now used is “once in a blue Moon” to describe a rare event and it is indeed rare for a Blue Moon to occur. Blue Moons occur around once in every two and a half years and it is a term used to describe two Full Moons in any one month. To demonstrate how rare, over the next ten years, there will be no blue moons in 2011, 2014 and 2017.

Over a century ago, according to a definition of a Blue Moon in the Farmer’s Almanac from Maine, USA, the Blue Moon was classed as the third Full Moon in a season that has four Full Moons.

Another modern definition of the term ‘Blue Moon’ is believed to have originated when in 1946, the author James Hugh Pruet offered his own interpretation of the above explanation, as a Blue Moon being the second Full Moon in a month.

Two Blue Moons in the same year is a rare event. This happened in 1961 and 1999 and the next will be in 2018. The Blue Moons occurring in December 1999 proved to be an even rarer phenomenon because the Full Moon fell on New Year’s Eve. This Blue Moon was visible from the United States, South America and Africa and it was more special for the fact that it was also a lunar eclipse. For those in Australia and Asia the Blue Moon fell on New Year’s Day and this made January 2000 a Blue Moon month for them.

In India and Asia, this Blue Moon coinciding with a lunar eclipse was of particular astrological significance. Astrologers will have read the Blue Moon and Lunar Eclipse as having marked the start of a transitional phase bringing the tying up of loose-ends of the past in preparation of the roller-coaster ride of the five years following the Eclipse. The next Blue Moon to occur on New year’s Eve will be in 2028.

Going with the definition of a Blue Moon being two Full Moons in one month, for this to occur, the first Full Moon of the month needs to be near or at the very beginning of the month so that the second will fall towards the end. A Blue Moon is more likely to occur during a month which has 31 days and it is indeed a rare event.

Equally, going with the Farmers’ Almanac definition of a Blue moon, the third blue moon in a season of four full moons will occur on 21st November 2010, then 21st August 2013. There will be a Blue Moon, according to this definition on  21st May 2016 and another on 18th May 2019.

Blue Moon once in a Blue Moon

Definition of a Blue Moon