Most people don’t realize that bed bugs are real and they are re-emerging as a serious pest. This is a comprehensive educational handout about the detection and treatment of bed bugs.

On this page:
What does a bed bug look like? | What are the causes | Signs & symptoms | Detection of an infestation | Treatment | Prevention | Video | References

Most people don’t realize that bed bugs are real and they are re-emerging as a serious pest. These tiny insects can infest your home, hide in your bedroom during the day, and feast on your blood at night.

Bed bugs were nearly eradicated in the United States after World War II, but resistant strains of bedbugs are now re-emerging and infesting homes at an increasing rate. In what’s becoming a mystery to entomologists, all 50 states are reporting outbreaks of these blood-sucking nocturnal insects. Bedbugs were nearly eradicated when DDT was used to get rid of infestations. But as global travel is increasing and people are avoiding the use of toxic chemicals as well as indoor spraying, the bugs are gaining a new foothold and becoming increasingly resistant to the milder pesticides.

Although bed bugs could theoretically act as a disease vector, as is the case with body lice, which transmit trench fever among homeless persons, most references claim that bed bugs have never been shown to transmit disease. However, the WHO has stated that they possibly play a role as vectors of hepatitis B virus.(2)

A bedbug is a 6-legged, flat, reddish-brown insect, and is about the size of a pencil eraser. After a blood-meal they become swollen and dark brown in colour.

Bedbugs give off a distinctive sweet odor, described as rotting coconuts. 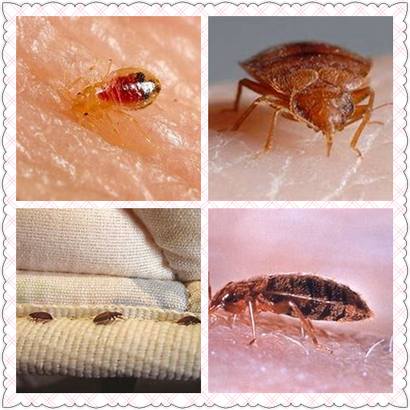 Bed Bugs tend to hide in small cracks and crevices close to a human environment. Their bodies can flatten to allow them to conceal themselves in cracks and crevices around the room and within furniture. They can be found in the bed frame, mattress, box spring, head board, in furniture crevices, behind baseboards, wallpaper, upholstery, electrical switchplates, and picture frames. Clutter around the room offers additional hiding places and increases the difficulty in eliminating bed bugs once they have become established.

They hide during the day and come out at night to feed on the blood of sleeping persons. They prefer humans, but in the absence of humans they feed on mice, rats, bats, migratory birds, chickens, cows and other animals. They can be brought into the house on a cat or dog, or in second-hand furniture, bedding, and clothes. Bedbugs have no wings so they travel only short distances on their own.

The bed bug uses its mouth parts adapted to piercing skin in order to obtain its blood meal which it can obtain in as little as 3 minutes. Bedbugs inject an anticoagulant to keep your blood flowing as they suck, along with an anesthetic agent to keep you from feeling them when they’re at work.

What are the causes of infestations?

A factor in the resurgence of bedbugs in the United States is changing pest-control practices. Sixty years ago the common use of DDT — which kills most insects — nearly eliminated bedbugs in the United States. Recently, the use of DDT is being phased out due to human toxicity concerns. Exterminators also commonly treated headboards in the bedroom, but have stopped this practice, as well. Also, current extermination practices are more insect-specific — what’s toxic to a cockroach may not kill a bedbug.

More recently, as world travel has increased, bedbugs are entering the home through luggage and clothing worn abroad.

Homes that are at increased risk of an infestation:

Signs and Symptoms: What does a bite look like?

Some people are very sensitive to the bites of the bedbug while others are hardly aware that they are bitten each night by large numbers of bedbugs.

Most people, however, develop a mild rash of small, itchy red bumps called papules. You might find the bumps in a linear or clustered pattern, due to repeated feedings by a single bedbug. The bites from a bed bug can be similar to a rash from scabies, body lice, fleas, or other insect bites. However, diagnostic clues of a bed bug infestation include clustering and timing of the bites.

Some individuals may develop severe allergic reactions or more extensive skin reactions such as: skin rashes similar to hives, blister-like skin inflammations, or groups of small, swollen sacs of pus. In rare cases, anaphylactic shock may occur as an allergic reaction to the substances the bedbug injects while feeding.

The bug itself is rarely found on affected persons or their clothing.

Detection of an infestation in your home

If you have itchy red bumps that are appearing mysteriously in the morning, immediately inspect your bedroom for bedbugs. Thoroughly examine crevices in walls, mattresses and furniture. You may need to perform your inspection at night when bedbugs are outside of their hiding places. If you’ve recently been on a trip, inspect your suitcases.

Look for these signs in your home:

Treatment of bedbug bites often involves self-care at home, but if you experience allergic reactions, severe skin reactions, or an infection of the bite, see your doctor for professional treatment.

If you think you’ve been bitten by a bedbug,

A mild itchy rash will usually resolve within one to two weeks without treatment, but it’s important to eliminate the source of the bugs. Without treatment, a few bedbugs can potentially grow to a colony of thousands within weeks.

Seek professional pest control assistance to eradicate any infestation. This difficult task should not be taken lightly and usually requires a thorough inspection of the bedbug habitat followed by professional extermination. Because bedbugs are such a new phenomenon, people don’t know what to do about them and often end up battling the problem for months. Throwing out bedding, using a bug fogger, moving the mattress, sleeping in the living room, or moving in with a friend will only relocate the bugs.

To help prevent a bedbug infestation:

(1) Emerging Infectious Diseases; Bed Bug Infestation in an Urban Environment, from the CDC
(2) Bedbugs, Fleas, Lice, Ticks and Mites from the World Health Organization (WHO), 2007
(3) Bed Bugs are Back from the National Pest Management Association
(4) “Mysterious Outbreak of Bed Bugs in all 50 States” San Francisco Chronicle, April 2007

Management and Treatment of Chagas Disease