What do Cheetahs Eat 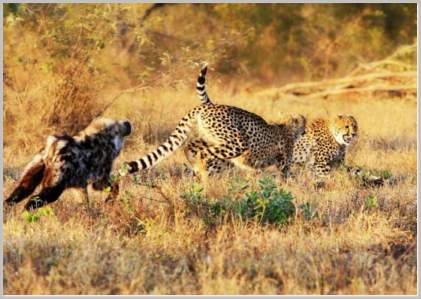 Cheetahs are one of the predators at the top of the food chain in their environment. With their lightning fast speed and precise hunting skills, not much is safe in the grasslands of Africa. Being on the endangered list, humans are the biggest threat to the majestic creatures.

Being carnivores, cheetahs have a wide range of animals on their menu. Gazelles are this big cat’s favorite food. In fact, gazelles make up over 90% of the cheetahs diet in the Serengeti. Because gazelle are also fast, most of the prey consists of fawns and young gazelles. This is primarily because they are still learning how to evade predators which puts them in a huge disadvantage compared to these fast cats. It is a 50-50 chance when it comes to catching an adult gazelle. Cheetahs may be fast but lack in stamina. With the gazelle’s zig-zag escape route, cheetahs typically give up on the chase.

Another favorite meal in the Serengeti is the wildebeest. For the most part, cheetahs prey on the young ones, but male cheetahs hunting in groups have been known to bring down a massive adult.

Just like the gazelle, hares use the same zig-zag procedure to tire out the cheetah so it has a better chance of getting away. However, cheetahs tend to feed on the younger hares which, just like the young gazelle, aren’t has skilled at evading an attack.

The largest population of cheetahs can be found in Namibia. Many cheetahs feed on antelopes because they are so prevalent in this area. The greatest challenge is the elusive nature of the antelope so it takes a skilled hunter such as a cheetah to make a meal of these sly animals.

Springboks are common in Southwest Africa, thus another favorite of the cheetahs in this area. In Botswana, the springboks make up most of the cheetah’s diet in this area. Springboks could be a formidable opponent with it comes to swiftness. They can run up to 50 mph but unfortunately this isn’t fast enough. Healthy, well-fed cheetahs can run at 75 mph and have topped out at 125 mph.

In the Kruger National Park, impalas make up 68% of a cheetahs diet. However, this meal isn’t always easy to catch. They are quite the athlete being able to jump 33-feet in front of them and jump up in the air more than 9-feet.

Zebras are found throughout African grasslands. Cheetahs are known to hunt zebras in Namibia, Angola, and other areas of South Africa. Although zebras aren’t considered a favorite of the cheetah they will prey on them if the opportunity arises especially when a young zebra is left undefended.

Cheetahs will also eat warthogs. However, they have to plan their attack carefully in order to feast on this wild pig. Warthogs can not only be fast, but their tusks can be quite deadly if used. Many times the warthog doesn’t run but will defend its territory. Sometimes they are even known to approach cheetahs to run them off.

Although skilled hunters, they have competition. Cheetahs prefer to hunt as quietly as possible and kill their prey with minimal noise. This is because many of the cheetah’s kills are typically stolen by lions, hyenas, and vultures. In order to kill the prey quietly, the cheetah uses stealth to get close enough to go in for the kill. First the fast cat trips its prey and begins to strangle it. They do this by biting the muzzle or biting into the neck. However, impalas, hares, and other small animals can be killed instantly by biting into their skull. Next the cheetah will drag the prey to the bushes to provide cover while it consumes its meal.

Female cheetahs with cubs tend to hunt daily to provide nourishment for her cubs. She starts teaching them to hunt around 6-months old. By the time the cubs reach 18-months old they are able to hunt on their own and the mother chases them away so they will learn independence.

What a Cheetahs Tail is for

The Cheetah Anatomy Built for Speed