The Taiga Biome: Animals, Plants, Climate and Where is Located

The taiga biome is the largest biome in the world. It’s located between 50° to 70° northern latitudes just below the Arctic Circle and above the temperate forest. It has temperatures below freezing throughout most of the year. The annual average precipitation ranges from 25-75 cm (10-30 inches). Taiga biome landscape is dominated principally by evergreen coniferous trees, although, broadleaf trees occurs in the southernmost region of the taiga. This type of biome is home to a number of animals which have adapted to the hard cold winter conditions. A continuous layer of permafrost limits the growth of shallow-rooted trees. 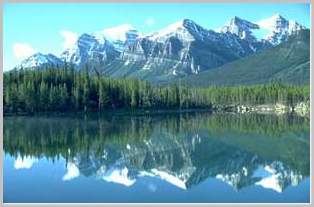 Taiga accounts for more than one third of the world´s forests, making it the world´s largest biome. Taiga occurs only in the Northern Hemisphere as in the Southern Hemisphere, at these latitudes, there are no continental lands. The taiga biome develops south of the tundra in a nearly continuous broad band of coniferous forests, which extends through the subarctic regions of Alaska and Canada in North America and Scandinavia and Russia in Europe and Asia. Taiga is the northernmost forest, occupying regions that fall in between 50-70° latitude N, with the largest extensions of taiga located in Canada and Russia.

The taiga biome is characterized by a subarctic climate with very long winters and short mild summers. Temperatures may vary from -50 to 20° C (-50 to 68° F) throughout the year. The summer season, which is short, is generally warm and humid with temperatures reaching 18° C (64° F). The growing season varies between regions. The longest growing season is found in coastal areas of Scandinavia and Finland. The shortest growing season occurs at the taiga-tundra ecotone with 50-70 days. The annual average rainfall ranges from 25-75 cm (10-30 inches), although, it can reach 100 cm (39 inches) in some areas. Most rain occurs during the summer months.

Taiga biome is dominated by coniferous trees, including fir, larch, spruce, hemlock and pine. Small-leaved deciduous trees, such as alder, birch, willow and poplar may grow most commonly in areas where they´re not reached by the extremes of the cold. Trees, including maple, oak, elm, and tilia may grow in the southernmost region of the taiga among the conifers, where there is a gradual transition into a temperate mixed forest. In the northernmost region of the taiga, trees are more scattered apart and the tree floor is covered with lichen.

Coniferous trees in the taiga, such as spruce, pine and fir have developed a number of adaptations to resist the cold. Their roots grow close to ground, allowing them to profit from the thin soils. Some trees may become tolerant to freezing temperatures in a process known as hardening. The narrow conical shape of coniferous trees, along with their drooping limbs, help them shed the snow, preventing the breakdown of their branches. Dahurian larch tree is the most cold tolerant tree in the world, withstanding temperatures of -70° C (-94° F), and they’re most commonly found in the northern most parts of the taiga and eastern Siberia. 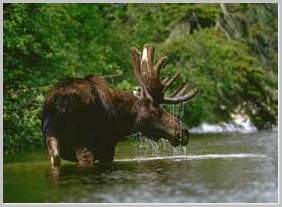 The taiga biome supports a great variety of animals. Most of them adapted to withstand the harsh cold conditions of the winter season. Taiga is home to a number of herbivorous animals, including the moose and caribou. Some regions of the southern taiga also have species of deer, including the roe deer and elk. Canada boreal forest alone includes over 80 species of mammals, more than 32 thousand species of insect and 130 species of fish. Reptiles and amphibians, which depend on environment conditions to regulate their temperature, are not abundant.

Some animals, to escape the scarcity of food during the winter, migrate to the south. Large mammals, such as bears usually eat abundantly during the summer and go into hibernation during the winter. Other animals have thick layers of fur or feathers that protect them from the cold temperatures. Rodent species, including the squirrel, beaver, snowshoe hare, mountain hare and vote have adapted well enough to survive the coldest winters. Owls and eagles, and carnivores, such as weasels and foxes feed on these rodents. Many species of birds migrate into the taiga during the summer season to feed on the insects which are abundant in the bogs and lakes.

A number of animal species threatened with extinction, due principally to deforestation, are found in the Canadian taiga forest, including the American black bear, grizzly bear, wolverine, and wood bison. According to , oil and gas exploration, mining, road building, forest fire, and climate change are common threats to the taiga biome. Animal hunting has greatly decreased taiga populations, and hydroelectric plants have added poisoning chemicals to the water system. At this rate, destruction of the taiga biome can be equaled to that of the rainforest biome.

An Introduction to Animals of the Coniferous Forest Biome

An Introduction to Animals of the Coniferous Forest Biome