The female prostate is better known as the Skene’s gland, though the colloquial term was accepted for descriptive anatomic use in 2001. It is gland tissue found in the region known as the G-spot, a controversial anatomical location along the vagina that was described by Grafenberg in 1950 among the 1940s explosion in sexuality research stemming from the Kinsey Institute at Indiana University. Prior to and since that time, the capability for female orgasm similar to that of men, i.e. ejaculation, has been questioned. The Skene’s gland has similar morphology and function to the male prostate gland, and so the term “female prostate” has been applied. 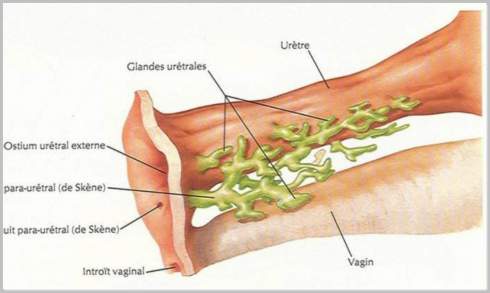 Structure and Location of the Skene’s Gland

The Skene’s gland duct is one of 30 normal duct structures in the female genital tract. Histologically the glands are made of normal glandular tissue lined with pseudostratified columnar epithelium. The duct structures are lined with squamous or transitional epithelium. A pair of Skene’s glands is found in the fleshy layer between the bladder and vagina, a couple of centimeters up from the external genital surface. The G-spot area where the gland resides is thought to be present along that tissue wall, which also runs parallel to the urethra , the urinary tract between the bladder and external environment (NewScientist). Due to this position, the Skene’s gland is also called the paraurethral gland.

A 2007 study in the Journal of Sexual Medicine (available here) found that two women who claim to experience ejaculation have glandular tissue surrounding their urethras. However, some researchers claim that only 10 percent of women have prostatic tissue in the Grafenberg area, and that the female prostate is not equivalent to this somewhat accepted anatomical description. In addition, some women have been found to not have these glands at all (they were likely too small to find rather than altogether absent).Thus, the exact size and location may differ among women.

Function of the Skene’s Gland

The prostate gland functions in males as a sexual organ. It produces fluid for ejaculation, which tends to occur at the climax of sexual activity. The Skene’s gland appears to excrete a similar watery fluid in women. The 2007 study mentioned above found that, biochemically, the fluid excreted from the Skene’s duct into the tract was consistent with prostate fluid, but not consistent with urine.  The function of prostate fluid is to aid in sperm deposition. In men, the fluid makes the urethra a hospitable environment, clearing it of urine during sexual activity. It also makes the acidic vaginal canal more alkaline for sperm survival. In women, the fluid from the female prostate may similarly aid in sperm travel in the vagina to the cervix, and ultimately to the egg for fertilization.

Structure and Function of the Prostate Gland