The Process of Photosynthesis: Light Dependent and Independent Reactions

Photosynthesis: A process essential for life on earth

Photosynthesis is the most essential biological process for human and animal life. It is the process by which carbon dioxide and water are converted by plants and sunlight into the oxygen we breathe and the organic molecules (like glucose) that we consume. The process of photosynthesis is made up of light dependent reactions (the photo’ part) and sugar making or light independent reactions (the synthesis part). 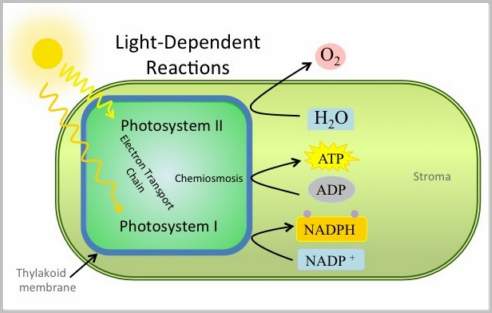 Here is an explanation in technical terms: To begin with water is taken up by the roots and circulated by veins to the leaves. Sunlight then enters the leaf and penetrates the mesophyll cells of the leaf. Within these cells are organelles known as chloroplasts made up of thylakoid membranes that are stacked and surrounded by fluid known as stoma. The light hits the thylakoid membranes and excites electrons that are within the reaction centres within these. The electrons then create ATP and NADPH to be used by the Calvin cycle. Light of red and blue wavelengths is the most effective for photosynthesis whereas green light is reflected hence the green appearance of plants. Also of important notice is that water accepts these electrons to become oxygen and some H+ ions.

In simple terms: Light enters the leaves of the plant and is used as the energy to produce products to be used by the light independent reactions.

In scientific terms: In land plants the carbon dioxide is absorbed by pores (called stomata) in the leaves of the plant. The carbon dioxide is then consumed by the Calvin cycle and combined with H+ ions to create glucose via a complicated chain of reactions that use the ATP and NADPH. The result of this process is that energy has been used to make glucose energy that will later be utilized when glucose is broken down by humans or animals.

In short: carbon dioxide enters the plant and along with the products produced by the light dependent reactions it is made into the sugar glucose.

This has just been a short overview of the biologically important process of photosynthesis (there is much more information available on the web and in books) but the important message are that there are two series and reactions that result in the production of oxygen and glucose from carbon dioxide and water.

The Process and Significance of Photosynthesis

The Process and Significance of Photosynthesis