The Difference between Nuclear Fission and Nuclear Fusion

Fission and fusion are each atomic nuclear reactions but they are very different from one another. Atomic means they involve individual atoms while nuclear means that the reaction is in the nucleus of the atoms. Reaction means that an interaction takes place that causes a change. Nuclear reactions, like all reactions, can take energy or release energy. 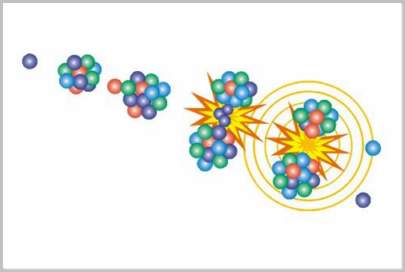 Fission is the splitting of atomic nuclei into two or more parts. To help understand the terminology we might consider the source of the word “fission”. It comes from the same root as the more familiar word “fissure” which refers to a split in something. Fission involves taking apart the nucleus of an atom. 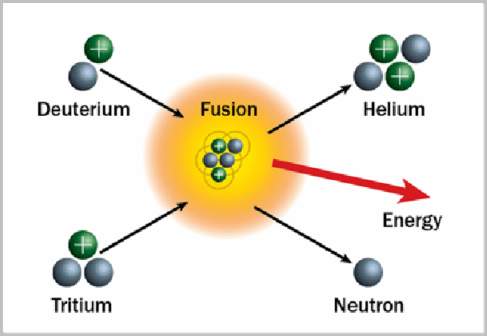 Fusion is the combining of two or more atomic nuclei into one. The root word for “fusion” is related to the common word “fuse” which means to combine. Fusion involves putting together nuclei of atoms.

Most reactions require an input of energy to occur. To start a chemical reaction we might use a match to start a piece of paper burning. In the case of burning paper, once the reaction is started it releases enough energy to continue the reaction in other parts of the paper and also releases energy in the form of heat and light.

The fission reactions which we use to generate energy in nuclear power plants usually require an input of energy to start. The most common reaction is the splitting of the nucleus of specific types uranium atoms.

To start nuclear fusion large amounts of energy are needed to force two atomic nuclei together. When the nuclei come together energy is released. Depending on the reaction that energy might be more or less than the energy required to initiate the reaction.

Nuclear fusion is the reaction that ultimately drives the universe. Stars combine atomic nuclei, which releases the energy that we experience as heat and light. The most common reaction in stars is the combination of hydrogen nuclei to form helium. The energy input to cause this reaction to occur comes from the massive gravity in the star that overcomes all other forces to push atomic nuclei together.

The attempts to generate energy on Earth from nuclear fusion are attempts to hold hydrogen in such high-energy environments to force this reaction to take place in a controlled manner. Thus far scientists have been unable to create such a controlled environment that is sustainable.

There are many more fusion reactions in stars beyond the hydrogen to helium reaction, however. Deep within stars the pressures due to the gravity of the star push all kinds of nuclei together to form more and more complex atoms. It is believed that the source of all of the elements in the universe beyond hydrogen is due to such reactions deep within stars.

Sometimes the elements that are created in the centers of the stars are unstable outside of that high-energy environment. When released from the center of stars through numerous types of cosmological incidents, these unstable atoms will start to break down or undergo fission. Some of these elements are so unstable that they will break down so fast we will never observe them in nature. Others are only slightly unstable and will last for millions or billions of years, on average. These are the radioactive elements that we are familiar with for fission reactions.

One example of such an unstable atom is uranium-235. So named because of the number of neutrons and protons in its nucleus, U-235 survives, on average, about a billion years. This is known as its half-life. If you have one pound of U-235 it will naturally decay over about a billion years so that there is only a half of a pound of U-235 after that time and the rest is changed to something else.

If we add energy to U-235, however, in the form of forcing another neutron into the nucleus of the atom, we create uranium 236 which is highly unstable and will break down very quickly, releasing energy in the process. This is the basis of the reaction in nuclear power plants. When a neutron of a specific energy is forced into the nucleus the atom will become unstable and it will split into two atoms with smaller nuclei. When that occurs, neutrons are released that are just the right energy to split additional atoms, causing what is known as a “chain reaction”. This chain reaction will continue until many, many more atoms are split, releasing large amounts of energy.

Controlled nuclear fusion is the “Holy Grail” of energy production. Fusion reactions combine relatively common isotopes of hydrogen into helium. The results of these reactions are stable atoms that don’t undergo further reactions and are, therefore, very safe and do not pollute. Fission power plants, the ones that we are using now, however, use rare isotopes of unstable elements. The resulting atoms that are left over are also unstable. Those unstable atoms release radiation and must be carefully handled and stored for very long times.

As you can see, while both are nuclear reactions, there are enormous differences between fusion and fission. The study of both reactions is in the realm of nuclear physics and both can tell us a lot about the nature of the universe.

The Difference between Nuclear Fission and Nuclear Fusion

The Difference between Nuclear Fission and Nuclear Fusion
Tweet