The Difference between an Earthquake Epicenter and Hypocenter

Earthquakes are produced when a sudden slip occurs between two plates on the earth´s surface. An earthquake creates the movement of the ground in the earth´s surface, and the shaking created causes accumulated stress to be radiated out as seismic waves. Not all ground movements produced during an earthquake are easily noticed by people; however, very precise instruments can detect seismic waves. During an earthquake, seismic waves are originated at a point known as the hypocenter, and the vertical point above in the surface of the earth, from the hypocenter, is called the epicenter.

Most earthquakes occur at the region of plate boundaries. At this region, plates may pull apart, collide with each other, or slip sideways past each other. The earth´s crust comprises eight major plates and several minor plates. Over many years, stress may build up between two plates. After stress has accumulated sufficiently, a sudden slip occurs among the plates, and the built up energy is released as an earthquake. The Pacific Plate, which lies along the coastal regions of the Pacific Ocean, is one of the most active seismic regions in the world. 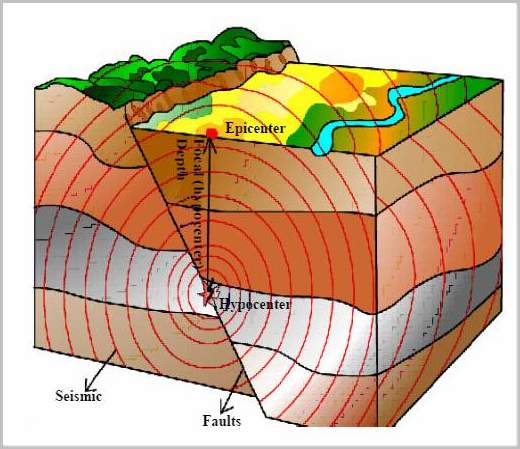 After an earthquake occurs, there are subsequent small earthquakes known as aftershocks of all magnitudes which may last for months. These aftershocks signify that the earth´s surface is settling down into new positions, and they may last for as long as the seismic energy is released.  The calculation of foreshocks, main shock and aftershock of an earthquake permits the three dimensional mapping of the rupture in the fault and the direction of the released energy. The use of linear equations helps calculate the difference between the observed arrival times of the shockwaves and those calculated at the location of the hypocenter.

While some earthquakes are weak, and thus, rarely noticed by people, others may grow larger and last longer. The factors that intervene in the fault´s rupture are complex, and are currently being researched. Seismologists make use of regions of high seismic activity, such as Southern California, where earthquakes are very common. The seismic monitoring instruments used for the surveillance of earthquakes comprises one of the largest in the world. This network of monitoring equipment may allow seismologists to obtain deeper knowledge regarding earthquakes.

Earthquakes have produced great destruction throughout earth´s history. The most devastating earthquake known to have occurred is one that hit China in 1557, where almost one million people were killed. The strongest recorded earthquake that has occurred recently is the one in Chile on May 22, 1960. According to earthquakecountry.info, there are seven steps that people should undertake in order to be prepared for an earthquake.

What happens during the Process of an Earthquake

How an Earthquakes Epicenter is Located