Rocks Formed from Evaporation are Evaporites 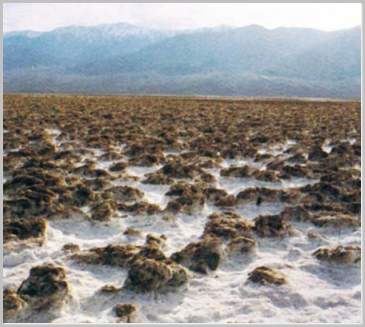 Many types rocks are formed by evaporation. They are referred to either as evaporites or chemical sedimentary rocks. They form in dry climates where the water can rapidly evaporate leaving sediment behind to precipitate. Evaporites are divided into two groups: marine and non-marine evaporites. Gypsum and halite are two of the most notable and common types of chemical sedimentary rocks. Travertine stalactites and stalagmites found in caves and caverns are also formed by evaporation.

The climate to form evaporites must be an ideal one in which water is present, but the water loss is greater than any water gained. Marine evaporites form in oceans or where oceans once were while non-marine form in lakes and other non-ocean environments. There is some debate when distinguishing the two types when there is a lack of fossils and identifying markers. Many of the oldest evaporite deposits are found in what are deserts today and it can be hard to determine if they were formerly oceans as compared to other bodies of water. In general, marine evaporites are thicker and they have been the focus of numerous laboratory studies. The most common minerals represented in them are calcite, gypsum, anhydrite, halite, sylvite, carnellite, langobeinite, polyhalite, and kanite. The non-marine evaporites usually contain minerals like bleodite, borax, epsomite, gaylussite, glauberite, mangadile, mirabilite, thenardite and trona. Confusion arises because they also potentially contain halite, gypsum, and anhydrite. The Great Salt Lake in Utah and the Dead Sea are important locations for historical non-marine evaporites, but the water there was still saline like an ocean.

Halite (NaCl) is a rock salt used as everyday table salt. It is sometimes found in rock beds or salt domes, which are huge solid masses that do not resemble salt at all. Halite is found in marine and non-marine environments. In most of the non-marine environments it forms in arid inland lakes, below sea level that dry up seasonally. Salt then forms on the shores. Gypsum (CaSO4 2(H2O)) is a unique rock with the same chemical makeup of anhydrite, but it contains water. Gypsum is sometimes found in clay beds as floater crystals, which are known for their flexibility and perfect structures. It forms in sandy regions, usually alongside limestone and occasionally in igneous rocks. It is the main ingredient in plaster-of-paris.

Limestone stalactites and stalagmites are composed mainly of the mineral calcite (CaCO3). Some limestone is an organic sedimentary rock, but other types are chemical sedimentary rock and more commonly called travertine. The later variety is formed by precipitation just like other evaporites. Water seeps into caves and slowly drips. The droplets sometimes partially evaporate before falling to the floor of the cave and they leave behind small deposits forming stalactites. If evaporation continues on the floor, stalagmites are created. Sometimes the process even goes on long enough to create floor to ceiling columns. It takes many, many years to form the recognizable icicle-like structures. Tufa is also an evaporite-type of limestone, forming near lakes with hot springs.

Evaporation forms a large number of rocks. The process occurs under only ideal conditions, but can happen in marine and non-marine environments to form rocks containing different minerals. Gypsum and halite are generally marine evaporites, and travertine is non-marine, but confusion occurs because there is a deal of overlap in the minerals present. Around eighty different minerals have been found in evaporites, but only about a dozen are in high enough qualities to actually be significant.

How Rocks are Formed