Peridotite is an igneous type of rock that is composed primarily of olivine. Peridotite has a coarse grain and may contain small amounts of other elements, such as spinel, chromite and plagioclase and amphibole. Peridotite is abundant on Earth and has a number of uses. 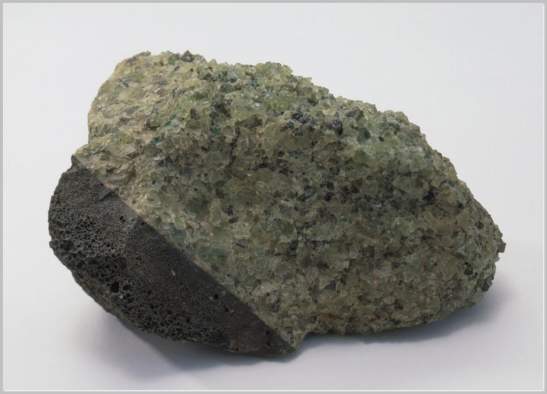 Peridotite is very high in magnesium and iron and low in silicon. This composition gives it a high density. As being exposed to the atmosphere, it combines with other compounds and converts into basalt, pyroxene, serpentine and combinations of rock types.

Peridotite is distributed widely across the globe because it is the dominant rock that composes the Earth’s crust. It is a layer that lies beneath a thin layer of other sediments. As the Earth’s crust shifts it may expose the underlying peridotite layer, but this layer is very unstable when exposed. It reacts quickly with water and converts to serpentinite. Because of its highly reactive nature, peridotite generally exists with other materials that may be prevalent in geologic structure of the region.

Peridotite that converts into serpentinite will often contain chrysotile asbestos and talc. Because it often combines with sulfides and chromites, nickel ores and platinum metals are often extracted from the rock. Peridotite is also the primary source of the gemstone peridot. Scientists are investigating the use of peridotite to store carbon dioxide gases that are responsible for global warming. However, the cost requirements of pipelines are currently prohibitive for this purpose.

Perodotite’s main component is olivine, a yellow-green or olive green mineral with a brittle texture. Olivine is a magnesium-iron silicate material that is quite soft and will weather to iddingsite, a combination of clay minerals, iron oxides and ferrous hydrites. Olivine sand is used in the aluminum industry for mold casting of aluminum products.

Perodotite is mined to extract the gemstone peridot. Peridot is a very old gemstone that has been used for thousands of years. Evidence of gemstone use of peridot is found in Ancient Egypt. In that age, peridots were mined from a small island off the Egyptian coast. Ancient Rome also valued the peridot gemstone for its rich color and transparency. In medieval times, it was worked into religious treasures such as those in the shrine at the Cologne Cathedral. Peridot gemstones have periodic popularity as fashion accessories. It has a deep green color that that is used in earrings, bracelets, necklaces, pendants and brooches. It is sometimes used in combination with other precious and semi-precious gemstones to create unique jewelry designs.

Peridotite is a common mineral with unique properties that make it valuable for many uses. It is likely that other uses will be found for it in the future.

Meteorites and the Information they Carry