With eight poisonous tentacles, the octopus obviously reproduces with great care! The female has to choose particularly wisely too, because she dies when her young hatch, so her first choice of mate is also her last. The male does not fare much better, living only a few months after mating.

The octopus belongs to the same phylum (mollusca) as the squid and cuttlefish. There are about 100 species, with the largest reaching up to 30 feet from tentacle tip to tentacle tip, and the smallest measuring a mere 3/8 of an inch. 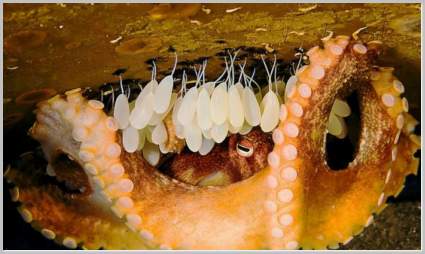 In octopus reproduction the male octopus uses a special spoon-shaped arm called a hectocotylus to reach inside his own body (mantle) to scoop up packets of sperm. He then (carefully!) approaches the female and reaches into her mantle to deposit the sperm next to her ovaries where the sperm come into contact with the eggs and fertilize them. In some species the female can keep the sperm alive within her mantle for several weeks until her eggs have matured enough to be fertilized.

After laying her eggs, the female then guards them for the 50 days or so before they hatch. During this time she does not eat at all and spends her time blowing jets of water over the eggs to ensure they get an adequate supply of oxygen. She also brushes the eggs to keep them clean and free from bacterial and other growths.

When the young hatch after 50 days, their mother, having eaten nothing, simply starves to death. The amount of development of the young depends on the species. Species that lay many eggs lay smaller eggs that hatch into larvae that drift as plankton at first. Many young hatch, but very few survive the plankton-eating predators. Species laying fewer, larger eggs have young that do not go through the larval stage.

Keeping an octopus in an aquarium is an enticing idea because of their intelligence and well-developed memory and their habits of camouflaging themselves, but they can be difficult animals to keep happy and healthy, and an extremely large aquarium is needed even for small species of octupus. It may be fascinating to study their reproduction, but any prospective octupus owner should be aware that the octopus is a shy creature and many species are entirely nocturnal. Do your research before you bring the octopus home!

How the Octopus Reproduces