Lifespan of a Dragonfly 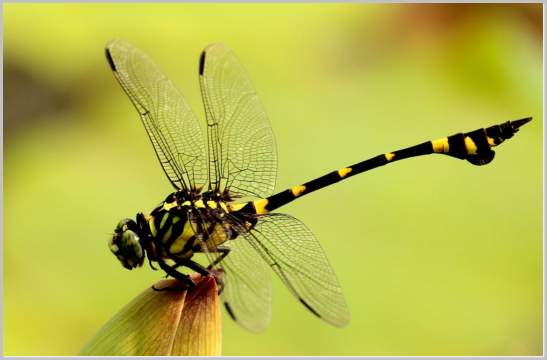 Depending on the particular species, the lifespan of a dragonfly may be somewhere between six months and perhaps five years. The first part of a dragonfly’s life, as a naiad, a larva, is the longest. Some species of naiads can live in the water for four years if conditions are right. The adult stage, when the dragonfly takes wing, is shorter. The adult dragonfly probably lives six or eight weeks at the most, although the Variegated Meadowhawk, Sympetrum corruptum, (among others) may overwinter.

Both larval and adult dragonflies spend their lives near water. The naiads prey on assorted small creatures of the aquatic community, such as worms and other larva. Larva of large dragonfly species will eat smaller dragonfly larva. They usually lie in wait and pounce on their tiny prey. Some of the larger larva, like the darners (Aeshnidae), may even attack tadpoles and small fish.

The larvae breathe by taking oxygen out of water with gills, as fish do. But dragonfly gills are located in the anus. So the naiads breathe by drawing water into the anus and then expelling it, and can also use this as a means of jet-propelled locomotion.

The larvae generally overwinter, or sometimes live through several winters. When they are finally mature, they leave the water to find a dry place to undergo their final molt. They climb on a stick or rock, usually in the sunlight of early morning. There they split out of their last larval skin, the exuvia, often leaving it to hang, and the new adult expands to its final size. This may take half an hour. Then it takes to the air.

The new adult is still soft bodied, and does not have its full color. This is called the teneral stage. As the days pass, its flight grows stronger, and its coloring brighter.

The mating of the dragonfly is a tandem flight. The male generally grasps the female from behind, and copulation occurs in the air. Then in some species the male stands by to guard the female as she strews the eggs. In other species, the female is alone. The eggs sometimes are left in water, washed off by a female flying just at the surface. Other dragonfly species deposit the eggs on aquatic plants or in plant tissues. The eggs often hatch in one to three weeks, but some in species the eggs overwinter and hatch the following spring.

It is not possible to say exactly what the life span of a dragonfly is, unless its species and habitat is known. But the lifespan of a dragonfly is not terribly short, as insect lives go. The mayfly, related to the dragonfly, lives about a year in the larval stage, but only hours to days as an adult. And after all, these insects do get to fly.

From the human point of view, dragonflies are entirely benign. They eat mosquitoes and gnats, as well as their larvae. They do not bite or sting. Also, with their netted iridescent wings and giant eyes, they are oddly beautiful.

Life Span of a Dragonfly