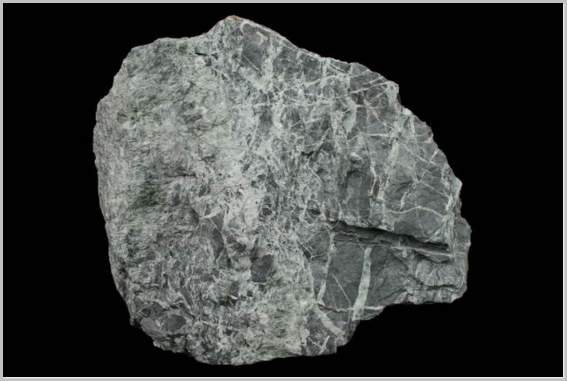 Hornfels are part of a group of metamorphic rocks produced under certain natural forces.  The word hornfels comes from the German meaning “hornstone” because it was associated with the horn-shaped peaks of the Alps. Hornfels are igneous rocks formed by contact metamorphism, meaning they have been “baked” by the intrusion of hot magma and may be chemically altered by the heat.

Hornfels are usually dark-brown to black, but may be constituted of minerals that give it a variety of colors, such as white, yellow, green tan or other colors. Hornfels are generally fine-grained and are often banded into layers. These layers may be weak enough to be shattered along the banded lines. Graining shows no orientation. Some types of hornfels have crystalline structures incorporated into them. Hornfels can be very hard and durable or splintery and easily fractured along their banded layers.

Common types of hornsfel include calcite-silicate hornfels, from limestone and biotite hornfels like shales and slates. Felspar-hornblende-pyroxene hornfels are created from basalt, diabase and andesite. Hornfels may also contain crystalline materials such as quartz, garnet, diopside, tourmaline, mica, vesuvianite and scapolite. Pyrites, actinolite, andalusite and other compounds may also be present.

Where Are Hornfels Found?

Hornfels are found in areas where the magma of the Earth’s center once broke through the crust, providing the necessary heat and pressure that presses the various types of rock together to create them. Hornfels are found in many places throughout the world. They can be found in abundance in Mexico, Australia, Europe, South America and the western United States. Anywhere that the requisite conditions of high temperature and low pressure existed at some point in the past can be a likely source of hornsfel rock.

How Are Hornfels Used

Primitive humans used hornfels for a number of tools that they used in butchering game and working materials, such as knives, scrapers, perforators and projectile points. Today, high-grade hornsfel rock is mined in quantity for road bases and concrete. Softer types of hornsfel rock are often used as decorative stone for garden paths, landscape beds and other hardscape uses. Because the composition of the hornsfel can vary greatly, a wide range of patterns and colors are available to produce different effects.

Hornfels provide another look at how rocks are formed by forces within the earth. The variety of components found in these specimens make them an interesting study of how the planet’s land masses came into existence.