Bone marrow is an integral part in the life of a human being, and it functions as the stemming-up region for many of the blood cells, including the red blood cells that carry oxygen from lungs to the other tissues. Furthermore, as it involves the production of white blood cells, which directly impinges on immunity, bone marrow failure can lead to poor immune response and to an increased susceptibility towards infections. Because of these reasons, the bone marrow failure would be detrimental to human life, and it may even lead to fatal outcomes when there is no other way to compensate.

Bone marrow would contain precursor cells from which all other types of cells stem out and would also consist of many of the precursor cells that it had already produced. Apart from these two, the marrow would also consist of matrix cells, as well as fat cells to a certain extent. In a healthy person, the marrow would account for about four percent of the body weight, and it can be classified into red and yellow bone marrow according to its location, color and from the cells that are present in abundance. 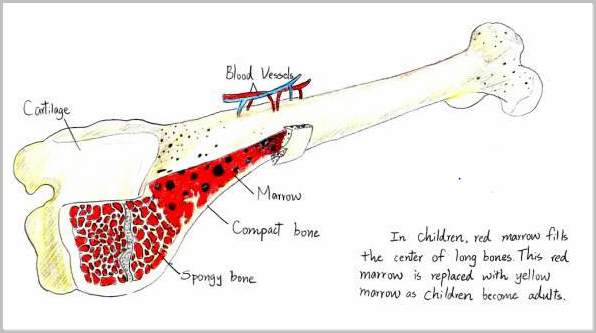 This is the main marrow that gives rise to all the red blood cells, white blood cells and the platelets and is located in the flat bones such as hip bones, skull bone, ribs, breast bone and the vertebrae. During the fetal life and in early childhood, many of the long bones would also contain red marrows, although they become ossified and replaced within few years. But the left over red marrow will prevail throughout life according to the requirements of the human body and would continue to function even when a person reaches the elderly stage. In certain instances, many diseases including cancers, infections and inflammatory conditions can affect the bone marrow and, at times, certain medical treatments such as radiation can also affect the marrow.

Yellow marrow is located in the hollow centers of the long bones, such as in the legs and in the arms, and yellow marrow largely consists of fat cells although it will have a different role from that of normal fat cells. Although the initial bone marrow present in a newborn would be of the red marrow variety, it will be converted into yellow marrow at desired locations by the age of five years.

Basically, these fat cells are the last resort for the body’s energy requirements and can be consumed in an event of extreme hunger. But their important function that is performed in relation to formation of cellular elements is their ability to convert themselves into red marrow in case of large volume blood losses that would deprive the body of oxygen-carrying capacity in certain instances. The yellow marrow, being so efficient, would be able to convert itself within one to two hours to take over the role of red marrow, and this is one of the natural reserves to sustain life in extreme events.