The Noble Gases form Group 18 of the Periodic Table of elements. Older American textbooks call this group VIIIA while in the older European convention it was group VIIIB or group 0.  Group 18 is the preferred International Union for Pure and Applied Chemistry (IUPAC) designation, proposed in 1985 and accepted since 1990. When looking at the periodic table group 18 forms the extreme right-hand column.

There are seven noble gases known to date. Only one noble gas is a man-made element. 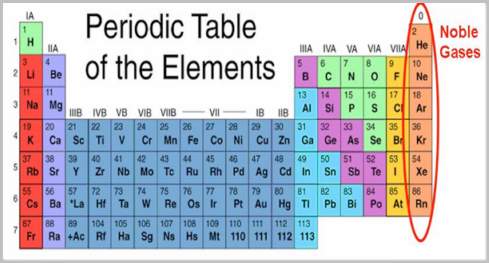 The Scottish chemist Sir William Ramsay discovered argon (Ar), neon (Ne), krypton (Kr) and xenon (Xe) during the eighteenth century. Sir William Ramsay also was the first to detect helium on earth although Pierre-Jules-César Janssen discovered it spectroscopically within the sun before he discovered it on earth. Friedrich Ernst Dorn discovered radon (Rn), the only naturally occurring radioactive noble gas, in 1900. Ununoctium (Uuo) is a man-made “super heavy” noble gas produced in 2002 at the Flerov Laboratory of Nuclear Reactions in Dubna, Russia. To produce a few atoms of this short-lived element they bombarded a target of californium-294 atoms with ions of calcium-48.

All of the noble gases have a complete compliment of electrons in their outer electron shell. This means they have a very stable electron structure. Because of this stable electron structure, noble gases were believed to be totally inert and unable to produce compounds with any other elements. This is no longer true, as some of them have been found to produce a few compounds, usually with one of the highly reactive elements of the Halogen Group such as fluorine. Often these compounds are only stable under specific conditions. Argon fluorohydride will decompose at temperatures above minus 245°C (28 K, minus 409°F). Therefore, for all practical commercial uses, the noble gases are inert.

Because they are so inert, some of the noble gases are of use in the provision of atmospheric shields. Such shields are of use in protecting the production of semi conductor crystals (germanium) and reactive elements (titanium). They are also in use for the protection of some arc welding and cutting processes. The gases commonly used for such shielding purposes are argon and helium. They are also of commercial use as liquid refrigerants.

Despite being in such low amounts in the earth’s atmosphere, the gases neon, argon, krypton and xenon’s commercial production is by the fractional distillation of liquid air. Helium could be produced in this manner but would be extremely expensive owing to its very low concentration in the earth’s atmosphere and its very low boiling point of minus 268.6°C (4.548884 K or minus 451.48°F), this is the lowest boiling point of any element. The decay of radioactive elements in the earth’s crust produces alpha and beta particles. Alpha particles are essentially helium nuclei while beta particles are either electrons or positrons. The alpha particle captures two electrons to become a helium atom. Fortunately, helium gas produced by radioactive decay within the earth’s crust becomes trapped underground within pockets of natural gas and is obtainable commercially from this source. The radioactive decay of radium produces radon. As the most stable isotope of radon has a very short half-life of only 3.8 days, the gas is not stored but produced on demand. There is no commercial production of ununoctium.

All noble gases will exhibit a glow if put into a vacuum discharge tube. Neon will produce the most intense discharge of all the noble gases. This property is useful in the production of neon lighting tubes. Xenon tubes are produced for use in bactericidal and strobe effect lamps.

An Overview about the Chemical Element Neon