What is Word & Chemical Cellular Respiration Equation – Aerobic and Anaerobic 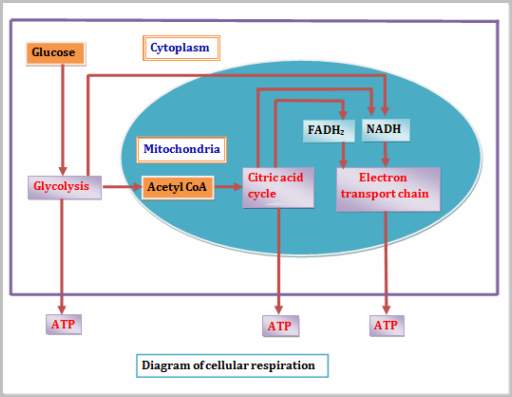 Cellular respiration is a process which happens inside the cells in which carbohydrates, especially glucose, is broken down for the energy to be released which can be used by the cells. This energy generated can be used for a lot of different processes but in all of those processes energy is transferred. The processes involved range from muscle contraction to the production of protein for the new cells. This respiration is an important feature of life. This is carried out by all the living cells.

Most of the metabolic processes occurring inside the cells are dependent on the use of enzymes. Respiration which is release of energy inside the cells, is a complicated set of reactions which uses about 70 varieties of enzymes which are the catalysts. Energy is generated in the several stages of the reaction process. Almost 75 % of it is in the form of heat. Unfortunately the heat energy which could not be used by the cell is wasted but, the other energy released is stored by the cell in the form of a easily available substance termed as adenosine triphosphate also popularly known as ATP.

In the aerobic respiration (with the use of oxygen) the glucose molecules are broken totally generating all of the useful energy and producing CO2 and H2O as waste products. The word equation for aerobic respiration shows:
Glucose + oxygen -> carbon dioxide + water + energy

However in the anaerobic respiration the glucose molecules are only partly broken so only a part of energy is released and instead of CO2 and H2O, the by-products are either CO2 and ethanol or lactic acid. The word equation for this is:
Glucose -> ethanol + carbon dioxide + energy
Glucose -> lactic acid + energy

Calculation of total ATP production in cellular respiration from one molecule of glucose:

The very first stage of respiration, glycolysis involves break down of glucose or sugar molecule into two three-carbon sugar molecules. During the process of glycolysis, two ATP molecules, two pyruvic acid molecules and two electrons with high energy are formed. These high energy molecules carry the molecules of NADH. The process of glycolysis can take olace in presence as well as absence of oxygen. Process of fermentation occurs in absence of oxygen. ATP is produced in fermentation.

This is also known as Kreb’s cycle. This begins when the three-carbon sugar molecules that are produced in above process, are converted to acetyl CoA. The Kreb’s cycle or citric acid cycle takes place only in the presence of oxygen but oxygen is not directly used in this process.

3. Electron transport
This process involves direct use of oxygen. It is basically an electron career series in the mitochondrial membrane of eukaryotic cells. The electrons with high energy are carried to oxygen through a chain of reaction. The ultimate product formed in this process is ATP after the formation of a gradient.

Fats are stored in the adipose tissue as triglycerides. When the principle fuel glucose is depleted and energy are needed, triglycerides are degraded into glycerol and fatty acids. Glycerol is converted into dihydroxyacetone phosphate and enters into glycolytic pathway. Fatty acids are oxidized by the process of β-oxidation and producing acetyl CoA that enters citric acid cycle.

Amino acids are used as metabolic fuel only if proteins intake are high, or if glucose and fat reserves are depleted. Major numbers of amino acids are converted into acetyl CoA and ammonia by the process of transamination and subsequent deamination. This Acetyl CoA can be enters into the citric acid cycle, and ammonia is excreted through urine as waste product by the process of urea cycle. 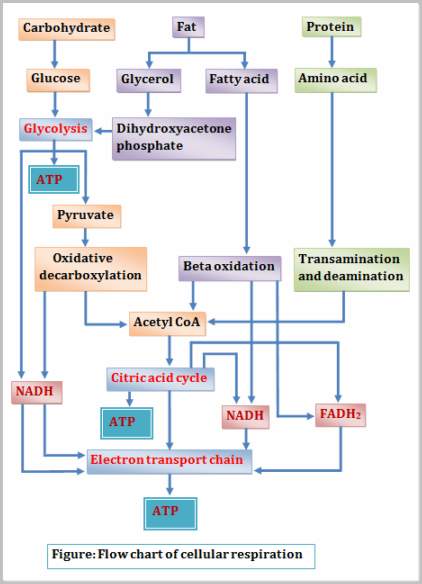 Relationship between Photosynthesis and Cellular Respiration